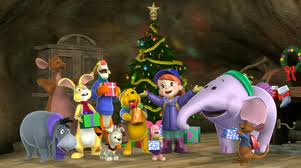 It’s rarely so clear to me that Erin has no fundamental appreciation for children’s media that’s actually aimed at children.

You know what? I am actually completely okay with variations on Winnie the Pooh. This is a franchise in which I would be a major hypocrite if I tried to pretend to be a purist. After all, I was raised on Welcome to Pooh Corner (“Be Too Smart for Strangers!”) and I loved The New Adventures of Winnie the Pooh (“He’s round and he’s fuzzy, I love him because he’s just Pooh Bear! Winnie the Pooh Bear!...) and I was in a stage production loosely based on the stories when I was about... nine, I think? (I was the bee who pointed out to the other bees that Pooh was hiding behind the piano.)

And you know what else? I have a ridiculous soft spot for well-meaning children’s tv, and My Friends Tigger & Pooh seems like it would fit right into that genre. I’ve had a lot of night jobs, and a lot of no cable, and that adds up to a lot of time spent watching or listening to afternoons on PBS. And not just the good stuff like Word Girl, Sesame Street and Arthur. I like all kinds of mediocre kids programming that’s meant to be educational: Cyberchase. Super Why! Sid the Science Kid. Dinosaur Train. Fetch with Ruff Ruffman. Angelina Ballerina. It’s a Big Big World. I LOVED It’s a Big Big World. It’s not that I would seek most of these shows out, not if there’s something else to do, but when I want something on in the background, or something to listen to while I paint or knit, or eat lunch, etc. that’s the kind of thing I’ll happily leave on. I just plain like children’s programming, as long as its heart is in the right place, and it’s not too hyper, too boring, or too dumb. (You’ll note there’s nothing on my short list aimed exclusively at toddlers, for example. Although, I remember a time when lots of people were sort of strangely fascinated with Blue’s Clues, not just me.)

So when Darby turns to the camera and asks us to play along, or there’s a musical snippet that clearly repeats in every episode, I tend to just go with it.

There are aspects of this that are pretty bad, so far as the logic of the plot goes, and the weird baby-lisp British accent of the little reindeer, but I just found it hilarious. And the songs! The songs are by turns sweet and utterly ridiculous. Especially the singing snowmen! They were awesome! “You don’t have to sally much forth-er” rhymes with “You can’t go very much north-er”! That’s amazing! Kudos!

So yeah, if you can approach this with the right mindset, I totally recommend My Friends Tigger & Pooh ‑ Super Sleuth Christmas Movie on the level of: Kinda Bad, Kinda Sweet, All Hilarious.