By Erin Snyder - December 16, 2012
If you're just joining us, every midnight between the 1st and 25th brings a new piece of genre fiction, always about Christmas Eve. This series is called 25 Christmas Eves, and we're on night 16. Today, I've got something especially Christmasy: a piece of far-future military SF called, CHRISTMAS CONQUERS THE UNIVERSE! Enjoy. 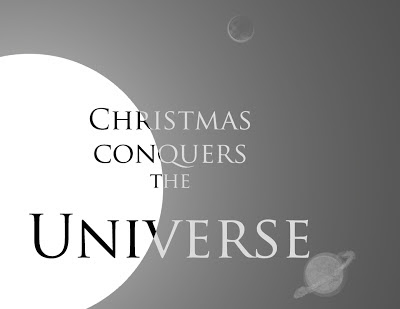 Admiral Belle Samson stepped onto the lift, coffee in hand. A small, green holographic image of the Blitzen-6 appeared before her. The lift shaft was highlighted in red, and she motioned towards the bridge and braced her coffee as she began accelerating upward.

“Would the admiral like to view Captain Yuleson’s report on the status of the Spruce Queen?” The computer’s voice was clear and brisk, as always.

“No. No thank you,” Samson said, blowing on her coffee. She then removed a flask from her coat pocket and added a modest amount of Irish Cream.

A light blinked while she put the flask away. “Notice. It is against regulations for a commanding officer to consume--”

With a wave of her hand, she silenced the computer. Then, balancing the cup on a handrail, she removed a nutmeg and microplane from another coat pocket. Once she’d grated a small amount into her coffee, she replaced these, as well. She brought the cup to her nose and inhaled the aroma. She said three short prayers before drinking: one to Jesus Christ, bringer of Christmas, one to Santa Claus, first saint of the holiday, and a third to Saint Y’rldrip Clp’ort, the Urfrim raised by humans who returned to his home world as an adult to spread the gospel of Christmas to his people.

When the doors to the lift slid open, Samson stood completely still. She cleared her throat to get the attention of one of the corporals standing nearby. The man stood at attention and called out, “Admiral on deck!”

The bridge, which was bustling with personnel checking instruments and plotting vectors was suddenly silent.

“At ease,” she said, satisfied. “Commander. What’s our status? Will we reach Thurkli on time?”

“Good,” Admiral Samson replied. “Do we know who the Thurkli will send?”

“Intelligence indicates they’ll tap Lopin to lead the fleet,” the Commander said. “They may believe you’ll be unwilling to fire on his ship.”

“If so, they’re gravely mistaken. Lopin was a good student, but I recognize my duty.”

“Of course, Sir. The Cratchit and Spruce Queen are reporting that they’re exceeding efficiency estimates.”

“Not at all surprising,” Belle Samson said. “Yuleson’s running the Queen, and I’m sure he’d like her to stand out. I’d be wondering what was wrong if his ship was running at the levels he’d presented us with. How’s the Catcher doing?”

“Falling behind,” Thimbletin said. “They’re unsure whether they’ll make it in time for the opening volley. Assuming things go that way, of course.”

Belle Samson took her seat and cleared her throat. “Commander, the Thurkli have refused to acknowledge the Jintilli Doctrine since its inception. I sincerely doubt they’ll come to their senses now. No one should be under any misconceptions about how this will play out. We’re likely to lose lives, possibly ships, today. Maybe this ship. But unless the Thurkli have something unexpected up their sleeves, the doctrines of True Christmas will be spread to this sector today.”

There was a round of applause, at least from the species that had hands, but Samson wondered if their hearts were really in it. The bridge was full of the best and the brightest graduates from the best universities on a dozen worlds, but less than half had been in a real fight. She wondered if they were scared or excited. She hoped it was the former: at least they’d be preparing themselves for what was coming.

One the the lieutenants spoke up. “Admiral. Long range sensors are detecting only a single ship.”

Samson smiled. “No. It’s the Hilgazzi Maneuver. Lopin’s keeping his ships close together to mask their size.”

“But Sir... that makes no sense. He’ll need to spread out his fleet if he hopes for the blockade to work. Besides, our instruments will be able to detect the difference once we’re closer. Sensors have improved alot since Hilgazzi’s time.”

“Lopin isn’t trying to fool us. He wrote a paper on the Battle of Pormire. I gave it a B, as I recall.”

“Sir. The patterns just changed. They’re... you’re right. There are at least a dozen ships flying close together.”

Commander Thimbletin stepped beside her chair. “What does it mean?”

“Nothing,” Samson replied. “The shift in formation has no relevance to Pormire. It’ll give Lopin something to puzzle over, though.” She sat up and spoke louder, “How are munition preparations? We’ll want missiles ready the moment we hit regular space.”

Satisfied, Admiral Samson sat back in her chair and looked over the bridge crew. They came from all over the galaxy, and all had volunteered to be here on Christmas Eve, to ensure the holiday cheer spread to Thurklin. She looked at the pair of Igjilti manning their console with their antennae. They’d originated on Virgo-9, a planet which had celebrated Christmas for eight hundred years, ever since the fourth coming of Jesus corresponded with the third resurrection of Saint Santa Claus in their sector. Beside them sat an Uip, a race with heads almost resembling Earth reindeer (the resemblance had sped along their conversion to Christmastianity a century ago). The custom of the sacrificial kilp, a relic of a winter festival from pagan times, had even been incorporated on Earth, where various kinds of fish were substituted for the flying amphibious creature.

Some of these races had been at war just a few generations ago: indeed, more than a few had been at war with the Allied Earth Union. But, in the end, goodwill had won out. Rebellion after futile rebellion had fallen, and the galaxy came together. Because that’s what Christmas does: it brings people together, no matter their differences.

All throughout the Milky Way, Christmas would be celebrated in one day, with one exception: Thurklin, the one advanced civilized world left which still clung to the Steinian Heresy. No one knew how many devout Christmasians resided on Thurklin and were prevented from recognizing the Universe’s holy day by backwards laws and misinterpretations of ancient texts.

But that would change today. Tomorrow, the people of Thurklin would be allowed to celebrate in peace. And, if history was any indicator, a few aspects of their culture would one day be absorbed into the celebrations occurring throughout the stars.

Lieutenants called out various specs for their fleet, along with up-to-the-minute reports on scans of enemy movements as they approached. Finally, they dropped out of warp and entered normal space. By this time, the Thurklin fleet had formed a blockade. Their shields - just like those on the Blitzen-6 - were raised.

A light flashed blue. Before one of the officers could report the transmission, Samson said, “Hologram,” and an image of Carlos Lopin appeared in the center of her bridge. “Season’s greetings,” she said.

“You have no jurisdiction here,” Lopin said. “On behalf of the Thurklin Republic, you are ordered to leave this sector of space immediately.”

“That will not be possible,” Admiral Samson replied. “On behalf of the Allied Earth Union, you are ordered to lower shields and return to the surface for disarmament.”

Lopin cleared his throat. “We do not answer to the Union nor to its fanatical leaders.”

“I’m going to give you some advice,” Samson said. “You do not want this fight. “Tomorrow is Christmas. Surrender and spend it with your family.”

Lopin laughed. “Tomorrow is the middle of spring on the only inhabited section of Thurklin. We celebrated Christmas three months ago.”

“Christmas only comes once a year,” Samson said, calmly. “And it begins at midnight on December 25th, Earth time. Eastern Standard.”

“The galaxy is a big place,” Lopin answered dryly. “Each world should recognize it at the relative time. And our world would rather not celebrate it once every two and a quarter years.”

“The Steinian Heresy was disproved a century ago,” Samson replied. “And Thurklin will no longer be permitted to prevent Christmastians from celebrating it at the ordained time.”

“More crimes your government will need to answer for.”

WIth a gesture, Lopin ordered the communication ended. Admiral Samson, still calm, looked at the bridge crew. “Prepare for incoming, and tell the fleet to move in. Concentrate fire on their flagship, and begin approach.”

The two fleets moved together like lovers beneath mistletoe. With a barrage of missiles, they reached for each other.
Erin Snyder Fiction