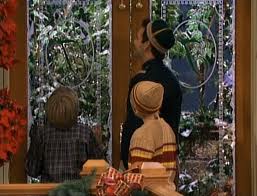 Bleck, another terrible Disney Channel sitcom. The ludicrously annoying premise of this show runs as follows: precocious scamps live in a fancy hotel because their mom is a...lounge singer? I know it used to be common, but does anyone who works in a hotel get paid in room and board anymore? Anyway, the show follows the misadventures of the kids and all the annoyingly shallow caricatures that work at the hotel.

This was really bad. Really, really bad. Groan-worthy, in fact. The characters were so vapid, the stereotypes so hideous, that by the time there was a couple stranded in the hotel by the blizzard even though all the rooms were booked and the woman was very pregnant, I was too exhausted from all the eye-rolling to even be angry.

Sure there was another plot about the kids and their divorced parents and one of them has visions of a Parent-Trap-like scenario for a while, but that was dumb too. It doesn’t help that these kids seem to have taken acting lessons from the kids on the disc of shows from the 50’s.

Avoid this like the plague of inane, useless babble that it is.
00's Comedy Episode Lindsay Sucks