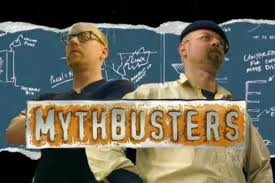 Huh. I was not actually expecting that one to be so boring. Only it was, in fact, really boring.

Has Mythbusters always been boring, but I only watched it at times in my life when I wasn’t very picky? Although come to think of it, Mythbusters has always been something that I either heard about or would occasionally watch a clip from, not a show I ever sat down and watched.

In this episode, a great deal of screen time is dedicated to building a Rube Goldberg device centering on the Mentos-soda reaction and a few holiday knick-knacks. It has to be designed and built and talked about and then tried over and over. These segments are dull, un-whimsical, and annoying.

Meanwhile, the kids on the show “test” a bunch of other “myths”, although I think they might have been scraping the bottom of the internet for some of these.

Can you break your foot (or a small dog) by dropping a frozen turkey on it?
Well, considering the weight and density of a frozen turkey, I’d say, duh.

What crazy remedy keeps pine needles on Christmas trees longest?
Frankly, the experiment design was so pathetic here, not even counting the low sample size, that I just rolled my eyes.

Can you cook a turkey with the microwaves from a radar array?
Generally no. You morons.

Does a turkey blow up if you stick explosives in it?
….Sigh.

Seriously, it was like the cast of Scooby Doo: just a bunch of kids getting high and trying stupid shit. A guy I lived with in college tried to fry stuff in Mountain Dew because brominated vegetable oil was listed as an ingredient, and that was really funny because it was the middle of the night and the kitchen smelled really weird for a while. Good story, but it’s not the kind of thing that makes scintillating television.

At the very end, the Rube Goldberg device finally works, for what that’s worth. Frankly, by that point I would have given the show higher marks if the device had failed.
00's Comedy Edutainment Episode Lindsay Reality Sucks