By Erin Snyder - December 18, 2012
It's the 18th day of 25 Christmas Eves, my attempt to provide you with 25 genre stories about Christmas Eve. Today, you're getting a very short piece called "Slouching." Give it a read: 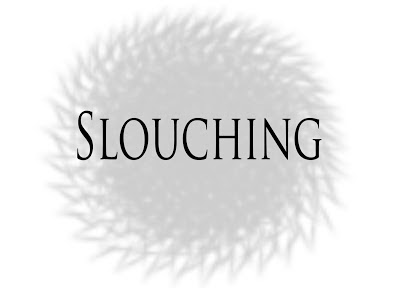 “I’ve been saying it, Bob. Been saying it for six years now. Ever since I moved into Elbington.”

The ground shakes the tiniest bit, like a trailer’s driving by. But you look down one side of Route 81 and up the other, and there’s not a blessed thing. Not a headlight to your left or a tail light to your right. And you know perfectly well there’s not another road east of Milford can hold a truck with more than two axles.

“Told Trev just last week up at Jones’ General Store, when he was all, ‘Merry CHRIST-mas.’ I told Trev he was wasting his breath. That there wouldn’t be a merry anything this go-round.”

It’s silent for a second, then you hear the rustling. You step off of Stanley’s porch to have a look around. There’s nothing for a second, but the rustling gets louder. Then you look up. Almost mistake it for a cloud at first, but that’s no cloud. It’s a flock of birds, but not like any flock you’ve ever seen. There’s crows up there, pigeons, gulls... all flying together. All the same direction.

“Don’t know how many times. I said Elbington celebrates too loud. Too many Christmas’s, I said. Been called Scrooge more times than I can count. Been called Grinch. Worse things, too. But I just said, go ahead and wait. You heard me say that, Bob. You heard me warn ‘em. Not a one of ‘em listened. Not even you, but you were civil. And that counts for something.”

There’s a sound like trees buckling in the wind. But there’s no wind tonight. Air’s still as the water in a frozen lake. Dead as the leaves in December.

“You know what I been saying, Bob. I been saying the dump’s too crowded. Folks said I was crazy. Said there’s still plenty of room. But I never did say it was full. Not once did I say that. Said it was crowded.”

The birds are gone now. Just silence for a minute. Then the buckling again. It’s coming from down by the dump.

“It was crowded long before the trash came. Crowded before Elbington was Elbington. Someone with a sick sense of humor put that dump there, Bob. Someone who didn’t respect the past. Someone who thought the dead would stay dead.”

“Sounds like the bridge, eh, Bob? That’s the thing with the dead. You get down to it, the dead really are trash. One and the same. Just buried waste decomposing under the ground. How much thought have you ever given that? You ever really stop and consider that? You leave trash down there long enough, it turns to something else. It grows together.”

There’s something in the air. Something awful. You can smell it pouring down. Like rotting eggs and dead fish, festering garbage on a summer day.

“Think about it. A thousand plastic trees. A million broken bulbs and cracked ornaments. Think about all that tinsel and garland. Inflated lawn ornaments that popped. Nut crackers that snapped and stocking that tore. Then wreaths, firs, dead poinsettias. Miles of wrapping paper. Miles and miles of it. All dumped on top, along with God knows how many gingerbread houses and fruitcakes. And what’s beneath? A thousand souls, long dead. So I ask you, Bob, what’s it all have in common? What’s it all mean?”

There’s not much moonlight tonight. Not more than a sliver. But it’s enough. The shape is beyond description, beyond sense of meaning. It’s a mound. A heap. A slouching, lumbering giant three hundred feet tall.

“It wants to be remembered. It wants to come back. See, I told them. I told them all, Bob. Said you couldn’t keep piling it up like that. You heard me warn them, Bob. All these years I said, it’ll come back to us.”

The mound moved forward. Does it have feet? Legs? You can’t tell. The ground shakes, more than before. It’s closer now.

“Take a gander, Bob. It’s Christmas past, come home to Elbington. Just in time to celebrate with us all.”

At the top of its impossibly large mass, on the tip of what could be a head, you make out a familiar shape: a Christmas tree, most likely artificial, quivering.
Erin Snyder Fiction