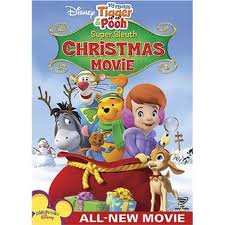 I think Lindsay's reviewing this as well, since we had very different impressions of this made-for-DVD movie. She enjoyed it, while I consider its existence an affront to all that's good in the Universe.

Here's the thing: I'm a pretty big fan of the Bear with Very Little Brain, and I've got some rather strong feelings regarding how Pooh and his friends should be adapted. The makers of this thing apparently feel differently. For example, I believe that Pooh and Tigger should NOT be part of a team that's sort of a combination of Mystery Inc. and a bunch of superheroes, as that represents a profound and disturbing lack of understanding of the world of Winnie the Pooh.

Here are a few other points I differ with the makers of "My Friends Tigger & Pooh":


The plot of this thing... God. It's just... what the hell were they thinking?

Roo and his elephant friend find a young talking reindeer and a seemingly empty sack, which is of course Santa's. They decide to help the reindeer get back to the North Pole, so Christmas doesn't have to be canceled. They enlist the help of the Super Sleuths: the aforementioned team consisting of Darby (Christopher Robin's replacement), Pooh, Tigger, and Darby's dog (I guess he's filling in for Scooby-Doo). A few other characters go with them, but I don't think they're technically "Super Sleuths."

They proceed to walk to the North Pole. There are several obstacles along the way, but nothing that deserves description. They reach the outskirts of the North Pole after a few hours and meet a bunch of singing snowmen.

These were extremely creepy.

The snowmen lead them the rest of the way, and they meet the reindeer's parents and Santa. Christmas is saved, Eeyore fills in as a reindeer, and everyone is happy.

Unless you like Winnie the Pooh. If that's the case, you're probably in tears at this point.
00's CG Comedy Crime Against Humanity Edutainment Erin Snyder Movie