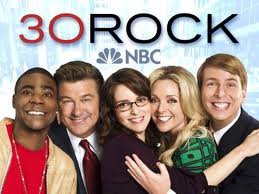 The first Christmas episode is in Season Two. The main plot, following Jack’s trouble with his elderly mother and Liz’s annoyingly perky family, was darn fun. There’s great family dynamics, and the resolution is nicely cynical. The B-plot about Tracy’s alcohol monitoring and the office Christmas party was also pretty funny.

Season three brings us this episode, with promising plot hooks and decent execution. Elaine Stritch is fabulous again as Jack’s mother, whom he has (accidentally?) hit with his car. Liz’s plot, however, is about her desire to donate toys to some needy kids, and while the takeaway is kinda funny, it’s awkward and painful to watch.

This one I had seen before, and it’s rather weak. The gags fall flatter and the tropes are tired. Blah.The joke about Jenna’s insecurity about her singing made me sort of angry. I know the character is shallow and crazy, but I just didn’t like it.

The last Holiday episode was pretty good. Elaine Stritch is lovely matched against Alan Alda for snark and humor. While it blindly abandons continuity from the earlier Christmas episodes, watching Liz flounder against the machinations of Jack and his fiancee and family was fun. Plus, I really like the title.
00's 2010 Comedy Episode Lindsay