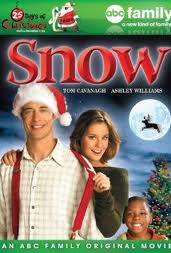 Unless you watch a lot of ABC, you most likely won't have heard of this ABC Family made-for-TV Christmas movie about "Nick Snowden," the new Santa Claus, going in search of a missing reindeer named "Buddy." It probably goes without saying, but you're not missing much.

The movie moves at a snail's pace as it alternates between the two leads, Snowden and his love interest, Sandy (I swear I'm not making this up, folks). Sandy works at the zoo which wound up with Buddy, courtesy of the movie's villain, Buck.

Nick Snowden is bumbling and ineffectual in his attempts to break Buddy out of the zoo, and in pretty much every other respect. He's got one "super power", which is the ability to turn mirrors into portals. I'm assuming this was an artifact of an early draft of the script which didn't include reindeer, since he really shouldn't need to travel around the world by sleigh if he can just teleport from home to home. It takes him a ridiculously long time to just show Sandy that he can do this, and thus get her help. If he'd done this in the beginning, he could have shaved an hour off this thing's ninety-minute run time.

This was pretty painful to sit through, though it had a few bright spots. In the middle of the movie, we got an origin story for Santa I haven't heard before, and it was actually pretty good. On top of that, the actors did far better work than the director and salvaged what they could.

Still, there's no reason to sit through this. It's dull and - with the exception of the thirty seconds spent on the origin - entirely pointless.

But at least it set up the characters so they'd be able to return in Snow 2: Brain Freeze. Can't wait to see that....
00's Comedy Erin Snyder Fantasy Movie Sucks