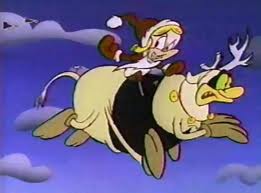 Christmas in Tattertown is a rather bizarre piece. Originally intended as a pilot for an animated series, it's basically a love letter from Ralph Bakshi to the largely forgotten animated works of the early 1900's. It's got a lot of issues, but it's a fascinating piece on its own. In my opinion, it's a shame it was never picked up.

The special is intentionally light on plot, but what's present follows a human teleported into a world inhabited by thrown out toys and other discarded objects. She sets out to teach the denizens of this new world about Christmas and eventually to celebrate. Meanwhile, the primary villain (the main character's doll), quickly assembles a criminal empire and attempts to take over Tattertown. I like that, by and large, characters don't play to type: in other words, a Christmas wreath is as likely to be a conman as anything else. It leads to some entertaining interactions, while adding depth to what could easily have been a two-dimensional world.

Despite the evil doll, there's not much conflict. The main character never realizes her doll is evil, and the battle is circumvented by a combination of luck and the stupidity of the doll's henchmen. While I'm not generally a fan of this type of resolution, it fits the overall tone here.

The character designs and backgrounds are clearly inspired by early animated shorts (there's even a reoccurring background character who looks suspiciously like Oswald the Rabbit). I like the world and at least some of the characters (the evil doll is pretty fantastic). The fact the story's narrated by Keith David (whose presence improves pretty much anything), doesn't hurt either.

The animation itself is pretty simplistic, but that's to be expected from the era. This predates Tiny Toons and Animaniacs, which were also tributes to earlier animated styles. Given how influential those shows were, I can't help but wonder if this might have made more of an impact if it had gone to series.

For all its strengths, the pacing is a little slow for me to recommend this to anyone who's not a serious fan of animation. But those of you who are might want to track this down. Unfortunately, it doesn't seem to have been released on DVD, but we found it on Youtube without much difficulty.
80's Comedy Erin Snyder Fantasy Special