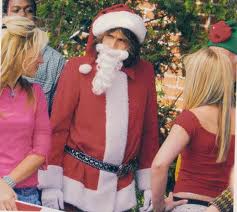 I've certainly heard of this show, but like most people who weren't eleven-year-old girls in 2003, I'd never actually seen an episode. While it was more or less as bad as I'd anticipated, nothing else about it resembled what I'd expected.

It's hard to put into words just how bizarre this thing really was. The show was a smorgasbord of surreal sequences, slapstick, parodies, and animated side comments thrown against the wall in the hopes something would stick. It was strange and incoherent. It might actually have been impressive if anything - ANYTHING - they'd done had been remotely funny or amusing. This is one of those things that mistakes weird for clever.

The plot is relatively simple: Lizzie is obsessed with winning a holiday parade float competition and expects help from her family and friends. Meanwhile, an old man shows up claiming to be Santa's lead elf. Pretty early on he effectively proves this claim by accurately recalling what Lizzie's father wanted for his 10th Christmas, but no one acknowledges this revelation. The plumbing is broken in the retirement home he's staying in, so Lizzie's parents invite him to live with them for a few days. Rather than help Lizzie with her float, her family (and eventually friends) go to help with the plumbing.

Lizzie becomes more and more obsessed with winning and more and more irritated with everyone else for working on the plumbing instead. This leads to a dream sequence where Lizzie is exposed to a sequence of classic Christmas movie parodies which don't add up to anything. For some reason, this makes her realize she's being selfish, so she goes to help her family. Then she magically gains plumbing knowledge and is able to fix the pipes.

The story ends with Santa showing up, revealing he's Steve Tyler from Aerosmith, then performing on Lizzie's float, which he's magically completed. Actually, that sequence is surreal enough to be kind of fascinating.

The episode is awful. It comes close to the 'so bad it's good line,' but it tries too hard to actually be worthy of this honor.
00's Comedy Episode Erin Snyder Fantasy Sucks