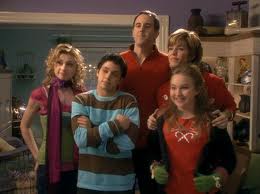 This is probably the strangest installment on the "Disney Channel Holiday" DVD we found on clearance, and believe me: that's saying quite a bit. I'd assumed it was the pilot from the episode's subject matter, along with the fact it's technically included as a Bonus Feature on the disc, but it turns out this was from the second season. That was kind of a let down: the episode felt like it had some good ideas behind it but was unpolished. Turns out, this was what the show was like after it was polished - I can only imagine what it was like beforehand.

Don't interpret that to mean the episode was bad. Actually, I can't decide whether it was bad or good. Hell, I'm not even sure it wasn't brilliant or horrible.

Let's start with the show's premise. Apparently, Phil of the Future is about a family from a few hundred years in the future marooned in the present when their time-Winnebago broke down in the middle of their vacation. This episode takes place at Christmas. The characters are telling Phil's girlfriend the story of how they got there, which takes place during the previous Christmas.

The first thing I noticed during the opening credits was that the shots of them traveling through time were pretty clearly based on the time vortex of Doctor Who, which is generally a good sign. A lot of the future/past humor felt reminiscent of Futurama (though it was toned back for a younger audience).

The plot of this episode involved Phil traveling back in time multiple times to the same point to prevent something from going wrong. Not everything was perfect (extraneous elements occurred at different intervals), but the writers clearly understood the basic premises of time travel and had fun with them.

There was a lot wrong with this, too, though. A lot of the humor was over-the-top and wasn't particularly funny. But when it hit its mark, it did so quite well.

I'm kind of tempted to try and track down some other episodes, just to see how they measure up. The show itself is a neat SF artifact I'd never heard of, if nothing else.
00's Comedy Episode Erin Snyder Science Fiction