Sherlock Holmes in the 22nd Century: The Adventure of the Blue Carbuncle (1999) 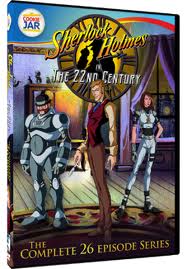 I knew that this show existed, although I don't recall ever seeing an episode before. It's odd, but kind of charming.

From what I gathered of the premise, Holmes has been awoken/resurrected in the far future, Captain America style, except with even more super-science. Watson is rebuilt as some kind of robot, and the new Lestrade is a lady cop. I liked her, she seemed to be the muscle. Overall I enjoyed this. It had some awkward made-for-children 'humor' and some cut corners in production here and there, but as a rather unique version of Holmes, I'm actually really on board with this.

The tone of the setting was really interesting, and the whole pastiche seemed to be right on the best line between taking the source material seriously while being delightfully tongue in cheek when appropriate.

I was wholly amused with the adaptation of the Blue Carbuncle story, in this case a popular animatronic toy with a program hidden inside, rather than a goose with a gemstone. There was definitely some handwaving around the technology, but I was surprised and impressed by how much of the story was kept. Holmes snarking about holidays in the future was an enjoyable addition.

Was it brilliant? No. Does it deserve a spot on your holiday playlist? If you're a fan of Holmes or animated cyberpunk, the answer may actually be yes! Just don't expect it to be more than it is, be aware that there's some stuff stuck in for little kids, and you’ll enjoy it just fine.
90's Action Episode Lindsay Mystery Science Fiction