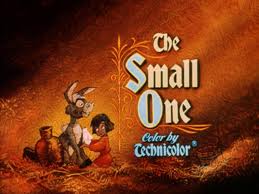 Let's get one thing straight from the start. The Small One is an animated piece directed by Don Bluth (and very much in his style) when he worked for Disney. Nestor the Long Eared Christmas Donkey is a stop-motion special by Rankin-Bass.  Both of these pieces are about the origins of the donkey who carries Mary to Bethlehem. Both of these pieces are not very good.  However, The Small One is only mediocre, so compared to the steaming pile of excrement that was Nestor, Small One comes out pretty far ahead in the donkey-story quality scale.

There are aspects of this special that aren't terrible, even. The story follows a young boy forced to sell his beloved but undersized donkey, who just wants to find his friend a new home. The animation is quite well done, both the boy and the donkey are cute, and there are some sweet interactions between them.

The story ends with the purchase of the donkey by Joseph. We don't follow them to Bethlehem, we never actually see Mary. This actually keeps a nice focus on the relationship between the boy and his donkey, which is the point.

That said, it was still boring. Really quite boring. The story takes forever to go anywhere and while the horror when they stumble into a tanning facility is surprisingly effective, I didn't really care in the end whether the kid sold his donkey successfully.

There's also some humor based around a bunch of broad caricatures that I think I might have liked as a little kid who didn't know any better, but the whole thing is a little uncomfortable now.

So to sum up: not terrible, just mediocre. Not worth seeking out, though. If you have awkward relatives or some other reason you absolutely have to watch a religious-ish Christmas special, you could do worse.
70's Drama Lindsay Special