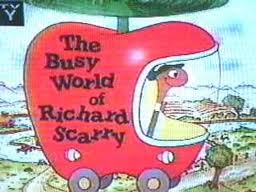 I had a bunch of Richard Scarry books when I was a kid. They featured anthropomorphic animals in either short, simple stories or in labeled pictures that taught vocabulary. I am not terribly familiar with this animated adaptation of said books.

We found this Christmas half-episode on a DVD of various holiday cartoons. It’s two short stories that add up to under 15 minutes. The opening is cute and catchy, and some of the humor was kind of cute as well. This episode didn’t have much to recommend it to a viewer who was not a small child, though.

The first story took place in New York City, in which some unknown force was stealing things by floating them up into the sky. A french detective arrives to solve the case, and after a few false starts, finds his nemesis in a dirigible with a giant magnet. It’s not actually as exciting as I probably just made it sound. The detective is slightly bumbling, the villain doesn’t really have a plan, and the final sight gag of things ending up returned but in the wrong places is rather awkward to see now, given the flooding and destruction in the city this year.

The second story was cuter, if obvious, and it takes place in Busytown. Hilda reads a story she’s written about Santa to her friends at the library. That’s it. The plot of the story is simple and straightforward: Santa crashes in the snow, has some trouble getting back on track. The humor comes from occasional commentary on the story and the fact that Hilda wrote herself into the story as the “kind, considerate” heroine.

This looks like a fine show for the 3-6 set, and was worth a smile or two from me, but isn’t exactly something I’d tell anyone to seek out.
90's Edutainment Episode Lindsay