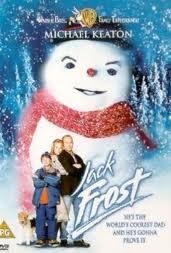 This is a movie from the 90's about a man coincidentally named "Jack Frost" who was killed in the aftermath of an automobile collision in a blizzard and is then reincarnated as a snowman, giving him an opportunity to fulfill some unfinished business in a small town.

Please note that everything written above applies both to this movie and to the 1996 horror film of the exact same name. If you get confused, just remember that this is the one that's actually kind of creepy.

Ostensibly, this is a family comedy about second chances, a boy getting over the loss of his father, and a dog peeing on a living snowman's leg. I'm not sure it did an adequate job of conveying any of those themes, though judging by the use of musical montages, someone really wanted to pretend it had. The film tried to convince the viewer that they were being moved, but clearly had no idea how to accomplish the Herculean task of incorporating actual human emotion into the picture. So instead they just stuck "Landslide" by Fleetwood Mac in the middle, which I personally found far more offensive than the infamous snowman rape scene in the other Jack Frost movie.

I don't know what to make of the fact that this thing actually had decent production values. It was edited, for all intents and purposes, the same way someone would film a real movie. Hell, it was even starring Michael Keaton, who coincidentally never starred in another major live-action movie again.

Most of the effects seemed to involve puppetry, courtesy of the Henson workshop, who - to their credit - seemed to be trying a bit less than usual. The effects were generally pretty bad, but not awful. This is one of those cases where awful effects might have helped the movie out, as having something to laugh at in Jack Frost could only have been a positive. It also might have brought down the movie's $85 million price tag, a sum which was almost certainly not recouped (kudos to the human race for that, by the way).

The plot is an utter mess, of course. I guess the movie deserves some credit for letting Jack die at the end, rather than pulling a last-minute miracle out of its snowy ass and restoring him to life. Mostly, it just felt fake through and through: it pretended it was funny, sad, touching, hopeful, and resonant. But in reality, it was just empty slush, pointless and meaningless drivel. The movie even had the gall to close with a reflective montage that elicited nothing. Honestly, if they had started flashing the words, "CHRISTMAS CLASSIC," in blinking red and green letters across the screen, I don't think it would have felt any tackier.

Needless to say, you shouldn't bother seeing this. Unless you're really, really drunk and you're up for watching both this and the '96 Jack Frost back-to-back: you might blend them together into a single movie, which actually might be kind of interesting.
90's Dramedy Erin Snyder Movie Sucks