A Muppets Christmas: Letters to Santa (2008) 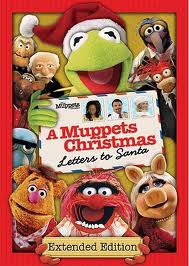 This is a made-for-television special starring The Muppets, their cute little girl neighbor, and an array of celebrity cameos. The cute little girl asks Gonzo to mail her letter to Santa, but hijinx at the Post Office prevent that from happening, so the Muppets put their various holiday plans on standby while they try to figure out how to get her letter through. Not a terrible premise, but nothing earth-shaking.

On the first scale, Letters to Santa does rather well. It’s cute, funny, and at under an hour run-time, doesn’t overstay its welcome.

Let me put it this way: I’ve seen a lot of Muppet Christmas specials, and this is one of the weakest ones. (I was going to say the weakest, and then I remembered John Denver pretending to be a toy soldier. However, The Muppets were the strength of that special, and here they’re just the gimmick.) Most of the jokes are too tame, there is some truly annoying abuse of sound effects, and the end has no emotional payoff. There’s no weight or resonance to anything here, just unfocused wackiness with a little schmaltz lathered on top.

Plus if you think about it at all, the message of the ending is pretty gross. I would warn for spoilers, but it’s telegraphed really early. The Muppets can grant the little girl’s Christmas wish by jettisoning all their own plans to stay in town and make her happy. They’re the Muppets, so they’re mostly okay with this, but “the world revolves around you - yes you!” is not the best take away for a holiday special.

The celebrity cameos are mostly lackluster, although some extra scenes on the DVD implied that Jane Krakowski had more than one funny line when they were filming, but the other was cut from the final version.

All that said, let’s go back to Christmas specials as a whole. There are funny parts, the songs aren’t too annoying on the whole, they convey the message without saying it directly that Santa’s elves get seriously sloshed on Christmas Eve, and although it is boring for Muppets, it’s still Muppets. That gives it a leg up on everything else.

Overall I’m mixed on this one. If it were on TV, I wouldn’t change the channel, but I wouldn’t necessarily recommend you seek this out unless you’re the kind of fan who needs to see everything or you’ve already memorized the dialogue to A Muppet Family Christmas, The Muppet Christmas Carol, and It's a Very Merry Muppet Christmas Movie.
00's Comedy Fantasy Lindsay Puppet Special