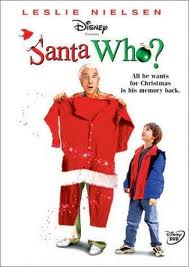 When you pick up a made-for-TV movie called "Santa Who", starring Leslie Nielsen as an amnesiac Claus who takes a job as a mall Santa, on a VHS tape for fifty cents, you brace yourself for what you assume will rank among the worse movies ever made. But I was actually pleasantly surprised.

That doesn't mean this was great or necessarily even good, though it treads shocking close to that line. There are a few short sequences that are awful, several that make literally no sense, the entire ending is a mess, and the production values are just shy of what you expect from college film projects these days.

And yet... it's oddly appealing. The script showed shocking care and restraint in developing its characters. Sure, they're all tired cliches, but they don't come off as unbelievably stupid or simplistic (well, at least not until the last ten or fifteen minutes, when the whole thing starts unraveling). The main character is your usual Scrooge stand-in, but he comes off as having a sense of humor about the whole thing rather than the obvious hostility you expect in this type of thing. Likewise, his girlfriend - a single mother, as if this needed another parallel to Miracle on 34th Street - doesn't berate him with old lectures about the importance of the holidays; instead, she respects his point of view and cracks a few jokes back.

Despite a horrible fat-suit, Nielsen does a decent job in the title role, conveying a sort of whimsical absent-mindedness that gets the job done. The idiotic slapstick his career devolved into is blissfully absent: the comedy around Santa is almost entirely relegated to the plot.

I found myself thinking of Elf a lot while watching this. It's not in the same league, of course, but both had a similar premise and avoided many of the same pitfalls. I don't want to imply this was anything spectacular - it really wasn't - but it wasn't a painful experience, and it delivered a handful of laughs. There's no real need to seek this out, but there are many worse flicks to sit through.
00's Comedy Erin Snyder Fantasy Movie