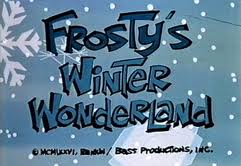 With the magician from part one absent, Jack Frost steps in as the villain, motivated by jealousy over a perceived slight: the children of this one particular town seem to like Frosty more than they like winter itself, despite the fact the snowy weather gets them out of school. Naturally, Jack Frost decides to steal his rival's magic hat, transforming him back into a normal snowman.

So, rather than move on to another town, he decides to go with murder.

This is all occurring concurrently with Frosty confronting loneliness due to the children's absence at night. For some reason, they think its a good idea to make Frosty a wife. In a fairly troubling scene, he provides the specifications for her construction (I couldn't decide on the better punch-line, so take your pick between Pygmalion Ice Sculpture or Stepford Snow-wife). The best scene in the special occurs when the kids take a bonnet off a horse and try to use it to bring Crystal to life. The chorus kicks in with, "There must have been some magic..., for when they placed it on her head...." And then nothing.

Unfortunately, the special doesn't end there. Frosty makes Crystal some ice-flowers, which animate her frozen form, transforming her into a snow-golem. She comes to life, and the two of them run off together. Jack Frost shows up and steals Frosty's hat, but Crystal just brings him back to life by making another magic ice flower.

I should probably remind you that Frosty's hat contains a flower, suggesting that was the source of the dark magic that brought him to life in the first place. I suppose this means that all flowers will animate snowmen, which makes it a good thing flowers die before it snows. Seriously, an army of snow-monsters is not something our military's prepared to handle.

With that resolved, the kids head into town to get "Parson Brown", so he can marry the two vile snow-demons. Of course, he refuses, as marrying two inhuman monstrosities would be an affront to Christian teachings or something. But apparently creating a third inhuman monstrosity in his own image to perform the ceremony is fine, so that's what they do.

You'd think they'd whip up some more ice-flowers to bring the snow-parson to life, but instead Brown uses the inherent powers of his Bible to perform the deed. Now, I'm not religious myself, but it surprises me that I've never heard anyone complain about the fact the Bible functioned as a conduit for unholy power in this special. Of course, this thing first aired before I was born, so what do I know?

If you haven't put one and one together yet, this entire plot was built around a verse of Winter Wonderland, allowing them to incorporate the song into the special, the way Frosty was sung throughout part one. Needless to say, the effect seems somewhat more forced this time around.

In the scheme of things, Frosty's Winter Wonderland is relatively innocuous and inoffensive, but it's still boring as hell. Even the bizarre, surreal elements fizzle out pretty quickly. It's lacking in energy, but isn't otherwise painful. And, like I said, I did like the moment when the "magic hat-trick" failed.

Seeing as I just spoiled everything remotely interesting in the special, you can feel free to skip over this one. You're welcome.
70's Erin Snyder Fantasy Musical Special