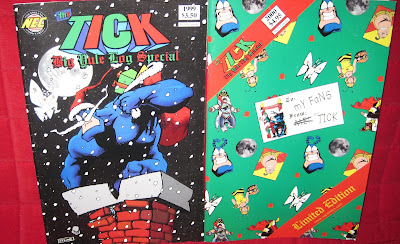 I’m going through my collection of holiday-themed back issues, looking at two issues every week until Christmas!

In this holiday story, The Tick and Arthur head to New York for a Christmas party at the Superheroes-only Comet Club. Meanwhile, Barry (the wannabe Tick) hires a villain to crash the party so he can ‘save’ everyone and show up the Tick. This is a funny story, although I could have used maybe a couple more pages; it felt quite short. It was a great read though, with a downright heartwarming-ish speech from Tick, and ninjas hiding in the party decorations.

The story in this one is called It Came From Outer Space to Ruin Yet Another Christmas. Tick brings Tunn-La (not of this Earth) home for the holidays, and Arthur tries to convince Tick that he can’t convince an “implacable enemy of humanity” to play nice. Another fun story complete with good jokes and great art.

Reading these two back-to-back was maybe not the best idea, because they are slightly similar in some respects. Both are solid, entertaining reads though.
Book Lindsay