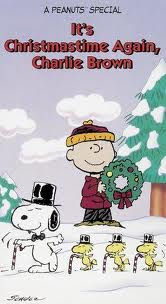 During the first year of Mainlining Christmas, we reviewed the original Charlie Brown Christmas Special. Well, Erin reviewed it. I sidestepped that one, in deference to the fact that my discomfort with it is rather personal. This, on the other hand, was just good fun.

It’s Christmastime Again was released nearly 30 years after the first one. As an attempt to create another beloved classic it’s a failure, but as an animated Peanuts special, I found it solid. It’s an animated adaptation of several holiday-themed storylines from the comic strips; the half-hour special has no overarching plot.

The upshot of this approach is that even if you don’t like the storyline about Charlie Brown selling wreaths door-to-door, you might like the one about Sally learning her lines for the Christmas Play, or Peppermint Patty and Marcie bickering about the same play. There’s a few nicely subversive scenes as well, which poke some fun at the original special.

I laughed, I smiled, I rolled my eyes at the occasional animation short-cut. Overall, a fun little piece.