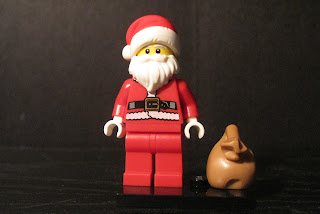 If you're a serious Lego collector (and, statistically speaking, you're almost certainly not), you already know about Lego's line of blind-packed minifigures, which are being sold damn-near everywhere for about three bucks a pop. Series 8 includes a ton of cool characters, but the only one I was really interested in was Claus here. That left me with three options: 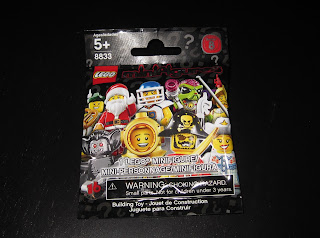 1) Buy a veritable shitload of overpriced Lego minifigures in the hopes of getting what I wanted,

2) Head on over to eBay and pay an even more inflated price for one that had been opened, or

3) Try and game the system using the almost indistinguishable code of raised bumps on the back of the pack.

So, I was probably standing in the toy section of Fred Meyer for ten minutes, painstakingly comparing the bumps on each pack to picture on my cell phone I'd gotten from a toy review site (is this a good time for a shout out to the always fantastic blog, "A Year of Toys"? I think it is). For those of you who haven't had the opportunity to experience the joy of "bump codes," they're a series of tiny, uncolored bumps embedded in the side of the pack that correspond to the toy inside. They're a pain in the ass, by the way. It's not always clear what's a bump and what's an air bubble, and on top of that some of the packs were unlabeled. It's almost as if Lego doesn't want me finding figures this way. 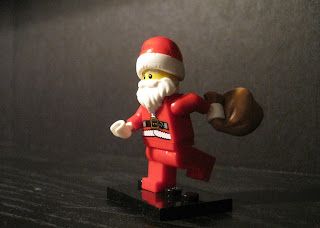 If you're a fan of vintage minifigs, you'll probably be disappointed. The new ones include unique faces (Santa, for example, has bushy eyebrows), so these aren't quite as interchangeable as the ones you had as a child. If you're under the age of - say - thirty, you have no idea what the hell I'm talking about, since your Lego Star Wars figures had unique heads, and the idea of people being disappointed that their toys are more complicated sounds backwards if not outright stupid.

Other than that, this is a fairly run-of-the-mill Lego figure. Since that's all it's supposed to be, it meets expectations. Lego makes solid toys; these are a hell of a lot sturdier than what most toy companies are churning out these days. The joints are strong, and the pieces lock together without a fuss. I'm sure that sounds obvious to most people, but believe me: Lego's competitors have yet to pull this feat off. 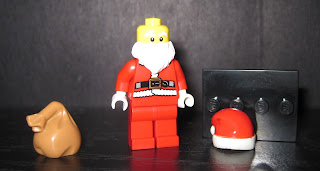 The "special" pieces -namely the beard, the hat, and the sack - are decent enough. The body piece, which depicts Santa's coat, is a bit underwhelming, though. Also, A Year of Toys complained that Santa's black boots weren't painted, and I'm inclined to agree. You also get a rectangular Lego stand, if you care (you probably won't). 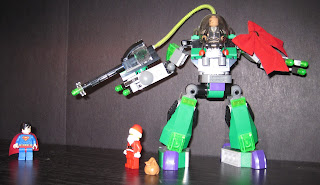 "Sorry, Superman. Lex was surprisingly good this year, and the only thing he asked for was a kryptonite-powered mech-suit."

This is certainly cool. At $2.99, he's simultaneously absurdly overpriced yet cheap enough to make the point moot. I kind of think Lego missed an opportunity here: if this wasn't blind packed, he'd have far more value as a stocking stuffer. I bet they could have sold a million of these at three bucks a pop if they'd played their cards right.

If you're specifically looking for a Lego Santa and don't mind burning some time in a toy store squinting at tiny bumps on black plastic, this isn't a bad way to go. However, if you're just looking for a kitchy Santa toy, I'd say Playmobile has better bargains. 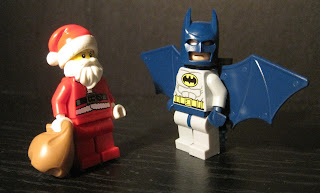 "Unless you've got my parents alive and well in there, I honestly don't care which list I made. I've got work to do."
Erin Snyder Toy