Date With the Angels: The Christmas Show (1957) 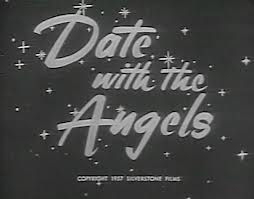 Seeing a young Betty White was even stranger than seeing a young George Burns in the Burns and Allen Show. Unfortunately, that dissonance was by far the best part of this thing.

The respect I lost for White from her involvement in this show was quickly rekindled when I looked on Wikipedia for some context: it turns out this series suffered from interference from its sponsor, which resulted in any interesting elements being pulled. Apparently, Betty White has since disowned this thing, which absolves her of any culpability in my book.

The plot of this episode revolved around an elderly neighbor who wanted to feel useful. Vicki Angel got him a job at a nearby store's toy department run by a miserly curmudgeon, despite the fact that her neighbor really wasn't mentally capable of... well anything. He was put to work as the store's Santa Claus, despite clearly being unqualified. Since the store lacked even the most basic of security measures or managerial oversight, he was able to give away five hundred dollars worth of toys to kids (that's $4,115.96 in today's money; thank you, Bureau of Labor Statistics).

As I'm sure you can guess, the plot was resolved through melodramatic and uncharacteristic Christmas generosity.

If you want to see this, you can track it down on Youtube easily enough: I'm pretty sure it's public domain.
50's Comedy Episode Erin Snyder