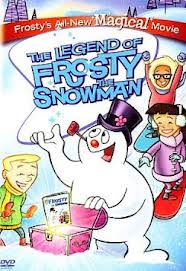 Since moving out of New York, Lindsay and I have been frequenting used book stores, many of which have a surprisingly impressive selection of used Christmas merchandise. We found "The Legend of Frosty the Snowman" going for a buck in the clearance section of one and bought it. I'll admit it was a bit overpriced, but at least we didn't wind up paying something exorbitant - like $1.50 or $1.99 - for this piece of junk.

The front of the box proudly advertises that the story is "Told and sung by Burt Reynolds." Before watching this, I wouldn't have thought that Burt Reynolds could sing. Funny thing: now that I have seen it, that hasn't changed. Fortunately, he only gets one chance, and that's (of course) Frosty the Snowman. It's actually the only song in the entire thing, though there are a number of musical montages that feel like someone was planning on putting a song in later but never got around to it.

I actually got briefly excited when I realized who the main character was. The original Frosty and Hinkle didn't part on the best of terms, so having him encounter a later generation seemed like it might have promise. Turns out I was gravely mistaken.

For reasons I can't even begin to fathom, the entire story in the original special was tossed out, and the flashbacks - courtesy of a magic comic book I'm not even going to begin to try and explain - present an entirely different origin for the magical snowman. The magician is no longer presented as an antagonist. His hat brings a snowman to life, but he never finds out, never hunts down Frosty and murders him in a greenhouse, and never faces down Santa. Not only does that not happen on screen, the special goes out of its way to frame Frosty's origin in a way that it couldn't have happened.

Here, Hinkle's son built Frosty, brought him to life with his father's magic hat, then failed to ever convince his father any of this occurred. A classmate of his then secretly got the hat and locked it in a safe for several decades.

The rest of it's gone. Karen, the main character in the original, gets a cheap nod when she's included on the front of the aforementioned "magic comic," but she's not part of the back story at all. Anyone who thinks female characters play too big a role in pop culture should love this.

So what's the point of feigning a connection? This is really no more in continuity with the original than Frosty Returns was. It's not like they didn't have time to include a real connection: the version we saw was over an hour long. I suppose I should also mention that this isn't in continuity with Frosty's Winter Wonderland, either, but I kind of think that's a good thing.

The Legend of Frosty the Snowman tries to live up to its name by portraying Frosty as some sort of mythical winter-spirit. This is normally the direction I like holiday stories to move in (is this a good time to plug my novel?) but Frosty might be too much of a stretch even for me. You want to play Rudolph as a mythical being; I'm right there with you. But Frosty? He's a goddamned snowman.

And this thing is just bizarre. When the magic hat isn't on a snowman, it's still possessed by Frosty's disembodied spirit and able to fly around of its own volition. It commits minor acts of vandalism and lures children into the woods, where it gets them to construct it a body it can inhabit.

Oh, yeah: did I mention this special was creepy as hell? There was a scene where Frosty fell on a kid, who then exploded through the snowman like an alien chest-buster. Needless to say, that was by far the best two seconds of the special.

Overall, The Legend of Frosty the Snowman isn't so much "bad" as it is extremely boring and pointless. And, if you're familiar with this blog at all, you probably know that's about a hundred times worse.

If you value your time at all, don't watch this.
00's Erin Snyder Fantasy Special