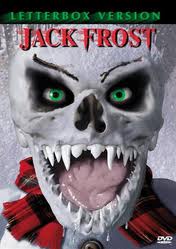 Not to be confused with Jack Frost (the animated short), Jack Frost (the Rankin/Bass special), Jack Frost (the family comedy from 1998), or any other Jack Frost production I'm forgetting, I just sat through the 1996 horror film. I use the term "horror" loosely: this is one of those campy horror/comedies that isn't remotely scary. Of course, it's no closer to being funny, but them's the breaks.

The movie opens with shots of a bunch of holiday ornaments while a voice-over sets up the backstory. This is really badly done and yet still somehow remains the high point of the movie, thanks to the fact everything that comes after it is utter crap.

The premise revolves around a serial killer who was arrested by a small-town cop. The killer's actual name is Jack Frost. He's being transported to his execution in the middle of a blizzard. If you're wondering why they didn't move him earlier, then you're clearly not drunk enough to be watching this movie. At any rate, the vehicle carrying him collides with another carrying an experimental acidic genetic mutagen, which also probably shouldn't be getting moved at 11:30 at night in the middle of a snowstorm.

As you'd expect, Jack gets dosed with the acid and bonds with the snow around him with the help of a cartoon interpretation of his DNA turning into ice or spikes or something. For the record, this appears to be hand-drawn, not CG, and is reminiscent of what you'd expect from something animated in the 1970's. It's also the best effect in the entire movie, once again by default. Most of the time, they just have characters turn around and unexpectedly come face-to-face with a snowman. If you were expecting much suit or puppet work, you're going to be disappointed.

At about this point in the movie, there were a number of questions going through my head. Why was this movie made? Who the hell thought this was a good idea? Was this thing's budget even in the six figures?

For the record, I have no answers for any of those questions, despite devoting the entire runtime to contemplating them. Calling this thing brainless is an understatement: I am a less intelligent human being now that I've seen it than I was before it began.

Oddly enough, it felt like this thing was trying - and failing - to be clever. There were a lot of jokes, usually made by Frost after he murdered yet another minor character. They weren't remotely entertaining, by the way: just really obvious puns that left me wondering why the writers bothered to include them. We're talking lines like, "Gosh. I only axed you for a smoke," after he murdered someone with an ax. It seems like they were trying to make this horrible in the hopes it would gain cult status (which it kind of has - more on that in a moment). Only, it's not like the movie was particularly violent or gruesome. Pull back the language and remove the infamous bath scene, and this would be PG-13 by today's standards.

And that brings us to the bath scene. Odds are, if you've heard about this movie, it's been in the context of this. For the rest of you, allow me to spoil the closest thing this movie offers to shock-value: the snowman rapes a women, presumably using his notably absent carrot. The sequence is about as stupid as you'd expect, and the fact the writers found the idea funny tells you a lot about the folks who made this thing. The fact this scene has given the film a modest following speaks very poorly about us as a species.

Ultimately, the movie was painful, though I've seen much worse. It was boring, but at an hour and a half, it was mercifully short. We're talking about a movie that was clearly made to be offensive and couldn't even really pull that off. They limited the killings to minor characters, and they went out of their way to paint most of them as horrible people first. Considering that Jack Frost's motivation was built around taking revenge on the main character, Frost didn't seem too interested in actually going after the guy's family.

This thing was built to be "so bad it's good": I can only assume those words were spoken to everyone involved to get them on the same page. But it falls so short of that line as to be almost laughable.

I think it's the only thing about Jack Frost that was.
90's Erin Snyder Horror Movie Sucks