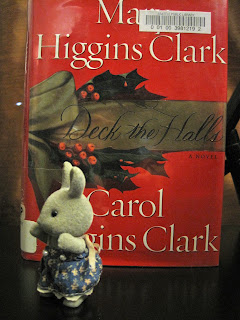 I found this book on a list of books tagged “Christmas” on goodreads. Apparently the Clarks, mother and daughter, have written a list of novels together all set at Christmas.

Premise: Two successful novelists decide to cram all their popular characters together in the space of 200 pages. For Christmas.

This book was an absolute mess. As I said above, it appears to be that both women took the protagonists of their successful suspense series and put them in a book together. This book is so short that you don’t get a sense of any of the characters, just told “this is person X and they are a Y” and the fact that you should care about them is assumed. The villains are petty and boring, the heroines sort of useless and bland. There are really useless, dull red herrings, and none of the sundry investigators do anything productive that actually leads to the resolution.

On a certain level, there was something a little creepy about this mother-daughter novelist team writing about a woman who was a novelist and her private investigator daughter dealing with the violent kidnapping, complete with ransom, of the woman’s husband. I mean, I understand write what you know, but that really gave me pause. There’s another amateur investigator, though, a Miss Marple type, and all her supporting characters.

At times it doesn’t completely suck - one woman’s worry about her children feels somewhat real, even if that’s her only character trait - but overall, there’s too much surface detail (purple prose alert!) and basically no character development. There’s some tremendously forced “romance” around the edges. Somehow the romantic plotlines manage to be present enough to be annoying and absent enough to also be completely annoying that it’s just assumed that these characters will get together, because that makes it a “happy” ending. Bleck.

The only good thing I can say about this is that it was short, and by and large not offensive.

I have to give special note, though, to a line that completely pulled me out of a scene, such that I reeled back, such that I lost any sympathy I might have scraped together for the guy whose kidnapping is the focus of the story. Rich dude actually verbally blames his fellow kidnappee, his female chauffeur, for not dating this skeezy guy she’d turned down who was now in on the kidnap plot. He takes it back almost immediately, and she doesn’t react strongly, makes a joke out of it, but it made me feel ill that I was supposed to give a shit what happened to this guy.
00's Book Lindsay Sucks