Book Review: The Battle for Christmas 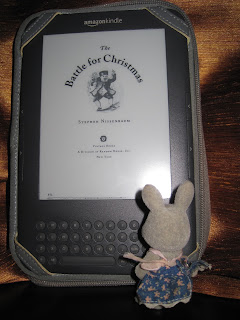 The Battle for Christmas
Stephen Nissenbaum, 1996

Premise: Non-Fiction book tracing the origins of American Christmas traditions, with emphasis on the shift from a more public-focused carnival Christmas to a more child-focused domestic holiday.

I found this book really interesting, if a bit long. Nissenbaum is a little too enamored of his own narrative, and sometimes doesn’t completely back up his proposals with evidence. That said, all of the stuff that is corroborated is really interesting.

I most enjoyed the accounts of how Puritans fought the celebration of Christmas and then later, in the early 1800’s, how gift-buying became fully central to the expectations of the season. It was fascinating reading about the creation of “Gift Books”, which became popular very quickly in the mid 1820’s. They may be one of the first products produced specifically to be purchased as a gift, and one of the first items sold to specific demographics created by marketing. What I mean is, you might buy a girl a doll or a young lady a dress or a boy a top, but for these products you wouldn’t buy a book, but rather specifically a “girl’s book” or a “lady’s book” or a “boy’s book”.

There’s also quite a bit of interesting biographical information on the authors of many seminal works which influenced Christmas in America.

The author is pushing the idea that over time, specific groups of people convinced the public to want to celebrate Christmas a) sober, b) with purchased presents, c) with family, and d) without rising above their station. And he’s probably at least partially right, although I don’t really buy every one of his leaps of logic as to why this happened.

I do like the thesis as stated in the epilogue: that “traditions are always changing and...the domestic Christmas idyll is surprisingly new...[also]...most of the problems we face at Christmas today - the greedy materialism, the jaded consumerism...are surprisingly old.” And the data backing this up is really interesting. Nissenbaum’s style loses me at times, though. He doesn’t seem quite able to separate himself from his subjects, which can work to convey the opinions and stances of people who thought quite differently than we do today. However, it can get rather awkward when it goes too long before a reality check when he’s talking about, say, the Antebellum South.

Still, for all that I don’t quite swallow every last argument put forward, and it focuses on American traditions with a singlemindedness that might put off those looking for a more holistic view, it was a really interesting book and well worth a read for any students of the history of Christmas.
90's Book Lindsay