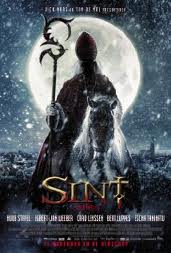 Saint (or "Sint") is a Dutch horror movie about a murderous zombie Saint Nicholas who descends upon Amsterdam every few decades to wreak havoc with an army of undead Black Peters when the full moon coincides with December 5th.

The selling point for me was the promise of a killer Saint Nicholas, not just another Santa Claus. That sounded surprisingly gutsy: risking the rage of the Catholic Church on top of myriad family groups. Well, I wound up disappointed. While the zombie killer was an undead bishop named "Niklas," the film made it abundantly clear he wasn't Saint Nicholas of Myra, but rather some psychotic bishop from the late fifteenth century. On top of that, it was stated that Nicholas of Myra was a fictitious character invented to cover up the murderous crimes of this zombie. I guess that was done so they could tie his origin to Amsterdam and Saint Nicholas' Eve. Personally, I felt ripped off.

None of it really made much sense. It was clearly attempting to make some sort of point about the commercialization of the holiday and the violent history of the church, but in the end I was too bored to care.

All right. In the interest of full disclosure, I saw this on Netflix, which meant watching it dubbed. So, pretend I cared enough to write some kind of disclaimer about how the story might have been butchered or something.

But that wouldn't have helped with the lack of suspense. None of the horror was scary or funny: just kind of idiotic and boring. The kills felt derived and generic, and there was far, far too much time felt on the set up.

The characters weren't any better. They were two-dimensional and unsympathetic. The dialogue (again, badly dubbed) was painful, and some of the voice-over actors were absurdly miscast.

Like so many other films in this genre, Saint was clearly trying to pretend it was subversive, funny, and "so bad it's good." And, like the vast majority, it failed on all counts. If you want a darkly comedic foreign movie about an evil Santa and his deadly helpers, go check out Rare Exports. Saint doesn't come close.
2010 Erin Snyder Horror Movie Sucks