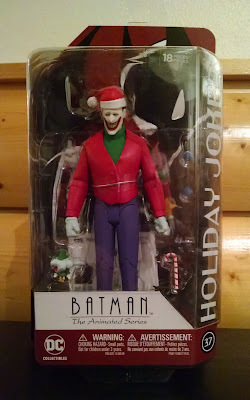 Christmas With the Joker, the second episode made of Batman: The Animated Series, is something of a guilty pleasure. I know there are some fans who consider it among the series's worst, but I love the episode's spin on the Joker. There's something both endearing and unsettling about his attempts to crack jokes involving destruction and danger. We see him playing more in this episode than we ever would again, poking at Batman with jokes only he seems to understand.

Over the past few years, DC Collectibles has been producing six-inch figures based on the show. Last year, I was pleasantly surprised to see them add a version of the Joker from that episode. It's branded "Holiday Joker," despite the episode's name having "Christmas" in the title (quick! Call Fox News!).

I ordered it and waited, hoping to get it in time for a Christmas review. Unfortunately, I missed it by a few days. Oh, well - there's always this year. 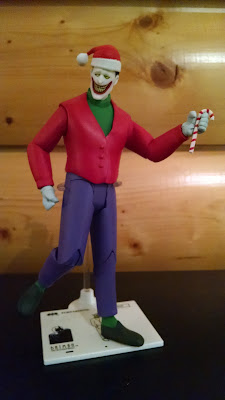 The line this is from is fantastic for the price and scale. This figure is fun in concept, but it's definitely got some major drawbacks, mostly related to accuracy. 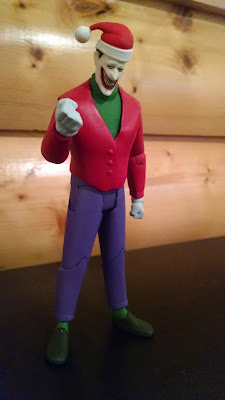 We might as well start with the head. It's not bad out of context - the grin is creepy, and the Santa hat looks great. But the mildly amused expression he's given isn't really in line with his portrayal in the episode. The size of his grin is about right, but the shape isn't. More importantly, his eyes are quite a bit larger this early in the series.

The rest of the figure looks good. I won't quibble about proportional accuracy - like most cartoon series, characters' bodies warp and shift from scene to scene, so this is close enough. The colors look good, and the outfit has the right colors and design.

Articulation is solid - you get most of the standard range of motion you'd expect for a six-inch action figure, including swivel/hinge hips and ball-and-pin wrists and elbows. The ankles are a little lacking - you only get cut joints there, but it's enough to pull off the obvious poses. I should also note that I found most of the wrists (there are quite a few extras) sealed in place due to the paint. 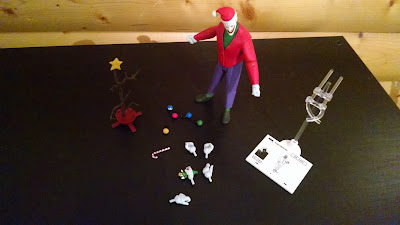 That's probably as good a transition as I'm going to get. One of this toy's main selling points is the number of accessories it comes with. You get the Joker, five extra hands, a "Charlie Brown" style tree, five ornaments, a candy cane, and a display stand. Pretty impressive.

As I said above, I had trouble getting the hinges to work on most of the wrists. Fortunately, the exception was the most important: Laughy, the elf. 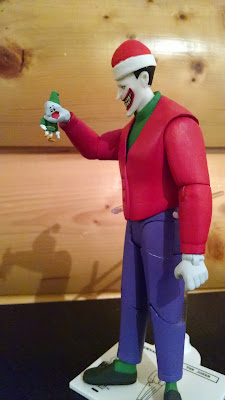 This is an astonishingly accurate recreation of one of the episode's more memorable ideas. As part of his illegal telecast, Joker dresses his hand up as an elf and uses it to taunt Batman. Without a doubt, it's the hand I'll be displaying him with.

Technically, this will never be screen accurate, though, because of the Santa hat. Joker only dons it for a few seconds early on before tossing it over his shoulder and knocking down another of the accessories, the Christmas tree: 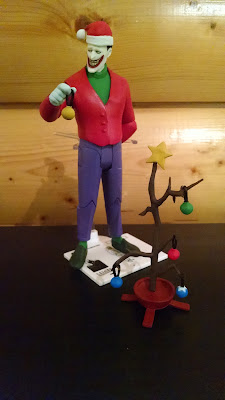 This is extremely close to the one on screen, particularly considering how little time it had. The branches match those from the show, and the ornaments' colors are even correct, down to the snowy-white cap on one of the blue ones. The only inaccuracy is in the shape - a few of the ornaments are depicted as saucers, rather than balls. We'll let that pass, though.

No issues with the candy cane, either. He used these to gag his hostages, if you're interested.

It's a great assortment, particularly with the tree. I suspect some purists will be annoyed the Joker doesn't have a second hat-less head to match the Laughy scenes, but I'd rather an inaccurate one with a holiday theme, anyway.

There are a few notable omissions, though. The one I'd most like to have gotten would be a "Betty Blooper" doll, which had a pretty important role late in the episode. I'd also have loved to get the "present" Joker gave Batman containing a spring-loaded pie. Both were iconic to the episode, as were the mini-Joker toy planes: I'd have taken any of these over the superfluous hands. 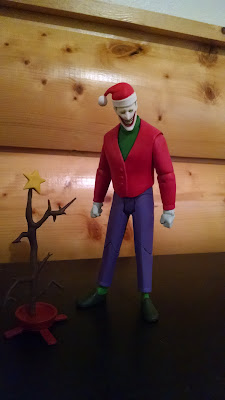 All that said, it's hard to argue DC Collectibles fell short here. The tree alone is an impressive extra, and the inclusion of Laughy is greatly appreciated.

I paid $24 for this figure from an online retailer, which has been the going rate. I wouldn't be surprised if you found it marked down closer to $15 this year, though - a lot of these are getting discounted. It's a decent addition if you've got a sentimental attachment to the episode or really want a decent Joker Christmas figure. Otherwise, it's definitely not one of the line's best, despite some great accessories.
Erin Snyder Superhero Toy