It's Always Sunny in Philadelphia: A Very Sunny Christmas (2010) 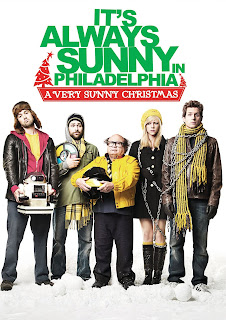 If you really like Bad Santa but feel betrayed by the movie's fundamentally positive message of hope, have I got a recommendation for you...

I've heard of this show before, but I'd never actually seen it. Even after watching the two-part Christmas special, I'm not entirely sure what to think. I tried watching the first episode to get a little context, but I turned it off about five minutes in - it was just too painful. Not bad, mind you - painful.

They're empty husks trying desperately to reclaim their humanity and feel some semblance of happiness at the holidays. Bleak, sure, but it's far easier to watch than a group of people humiliating themselves while being aware of their surroundings.

Wikipedia informs me the show has been called (and embraced the label) "Seinfeld on crack," which seems like a good, if reductive, description. I'll be a bit more specific. Based on the little I've seen, this is the absolute darkest, most amoral moments of any sitcom - the death of Susan on Seinfeld, the Frank Grimes episode of the Simpsons, Competitive Ecology on Community - stitched together and filmed on a handheld camera in a dirty, greasy setting.

God bless them for making a double-length Christmas special.

The story is broken out into two plots: one concerning twin brother and sister Dennis and Dee's attempts to force Frank (played by Danny DeVito) to be a better man, and the other around Charlie and Mac's attempts to get into the Christmas spirit.

Dennis and Dee start out hating Christmas, because their father had a tradition where he'd buy the gifts they wanted only to keep them for himself. Despite the fact they're grown (and, if I'm understanding the series synopsis, have learned he isn't their actual father), he still does this. This year, he buys a designer handbag Dee wants and a Lamborghini Dennis dreams of owning. He uses the handbag to store Cheetos and malt balls, and he drives the car recklessly, savoring their rage.

The siblings track down his former business partner, who Frank thinks is dead, and try to concoct a fairly standard Christmas Carol motif, dressing his partner up as a ghost. He goes along with it only after they assure him they'll give him a chance to try and save Frank's soul. Their plan fails miserably, not because Frank doesn't believe it, but because his reaction to seeing what he thinks is a ghost is to try and fight it with a golf club.

Once Dennis and Dee calm him down, they attempt to go through versions of past, present, and future, none of which have an effect. Eventually, they wind up parting ways in a graveyard, leaving Frank's old business partner to find his own way home.

Mac and Charlie's story starts in a very different place. They have nothing but positive associations with the holidays from their childhoods, at least until they each examine the others' memories. Mac discovers that his childhood presents were stolen from other families, while Charlie is forced to realize the parade of men who came to his house on Christmas dressed as Santa were really there because his mother was a prostitute.

They spend much of the episode trying halfheartedly to make amends to someone Mac inadvertently stole from as a child, but their gestures are neither thought-out nor appreciated. Charlie winds up viciously attacking a mall Santa.

Frank brings everyone together at the end, largely thanks to a stop-motion vision he had where the other characters joined together and murdered him while singing. He assures them he's a changed man and gives them the gifts he'd purchased for himself to prove it. His act of reconciliation is cut short by his former partner, who robs the gang at gunpoint.

A lot of shows toy with amorality around the holidays, but this one delivered on a level few manage. It's a dark, warped take on holiday specials, culminating in a fairly unique spin on the "snowing at Christmas" trope.

I have no idea whether this episode is an outlier or indicative of the series as a whole, and after a few minutes of the first episode, I really don't have any interest in finding out. But that's due to preference and taste - those five minutes I cringed through were intelligent. If you have a high tolerance for discomfort, you might want to give the series a chance.

Personally, I really liked the Christmas special as the dark reflection it was, but I think I'm good stopping here.
2010 Comedy Dark Comedy Erin Snyder Special