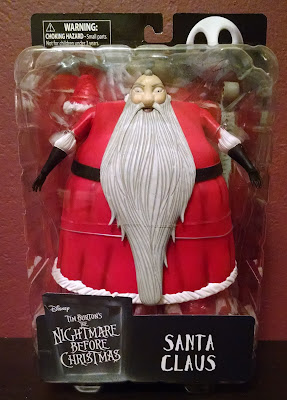 Those of you with unusually good memories still won't recall that I reviewed Jack from Series 1 of Diamond's Nightmare Before Christmas line a few years ago, because - frankly - it wasn't that memorable. So, given that, let's take a moment to recap.

We're now around thirteen years out from when NECA produced the first wave of their Nightmare Before Christmas line. Over a few years, they produced damn near every significant character (along with several insignificant ones) from the film. With one notable exception.

For whatever reason, they didn't make Santa. They did Jack in a Santa suit, but skipped the big guy himself. Fortunately, Diamond decided to rectify this omission, which brings us to today's review.

If you remember my write-up of Jack (which we've already established you don't), you know I wasn't overly impressed with the quality control. The arms and legs were too thin to support sturdy joints, so we were left with something that could barely stand up to being removed from its packaging. Obviously, Santa doesn't have this issue: he's about as bulky as they come. 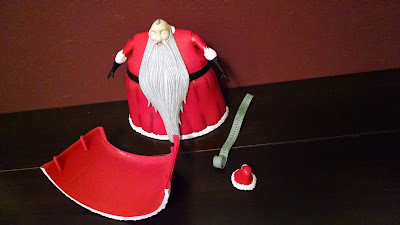 He's so bulky, in fact, he comes in a couple pieces. The back half of his coat is packaged separately, so you'll want to snap that into place. After you've taken a few minutes to appreciate they took the time to sculpt movie-accurate underwear, of course. 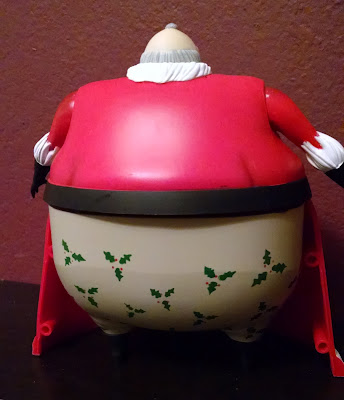 I've got plenty of issues with this figure, but I love they didn't skip this detail.

The back of the package advertises "multiple points of articulation," which is technically true but essentially meaningless. By my count, the figure has six joints, two of which are completely superfluous. 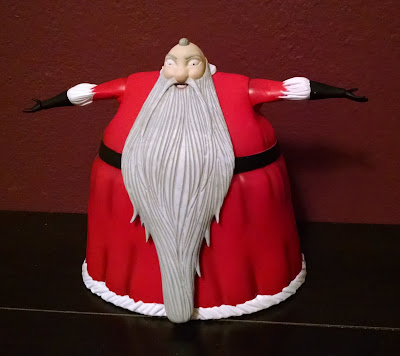 The superfluous joints are on his boots, which are completely concealed by his coat. I appreciate the detail, but it doesn't add much.

Next up are his shoulder joints. These are quite a bit better, letting you extend and rotate his arms. Last, his hands are connected with pin joints, which are fine but pop out every now and then.

And that's it. The head is locked in place, as is the beard (despite being a separate piece hanging over the body. I'm not sure this was the wrong choice, but don't pick this up assuming you're getting anything more than a statue with moving arms. 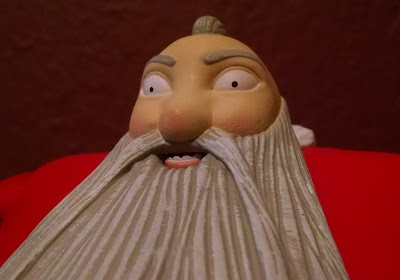 The sculpting is fine, if unremarkable. The high-point is the mouth: it's sculpted open, so it's got some depth.

The paint is mixed - they did good work on the face, but got sloppy around the gloves. There's also some weirdness around the pupils: the left is noticeably smaller than the right. I'm not entirely sure that isn't screen-accurate, though.

He's about six and a half inches tall (without his hat) and just as wide. Stretch out his arms, and he's got a nine-inch wingspan. 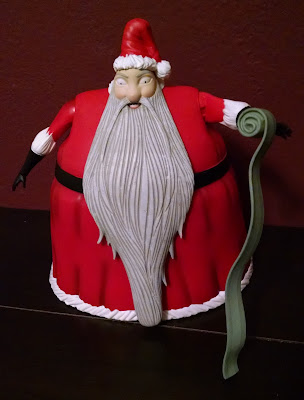 This version comes with a pair of accessories. You get his hat, which snaps in place over his hair, and a list he can kind of hold. The hat was pretty essential, though I appreciate that it's removable. The list is a nice addition, though the articulation limits its usefulness. He can hold it, but not in a natural pose, and certainly nowhere near his face.

I should mention there are actually two versions of this figure: the mass-market one I bought and a collectors' version you'll find at comic shops. The figures themselves are identical, but the collectors' version comes with a piece of a display set. Get all three figures in the set, and you'll have your very own Halloween Town fountain.

I'm running out of storage space, so I went with the cheaper version. If you've got the space for it and are interested in the other two figures, the pictures of the fountain look pretty sweet. 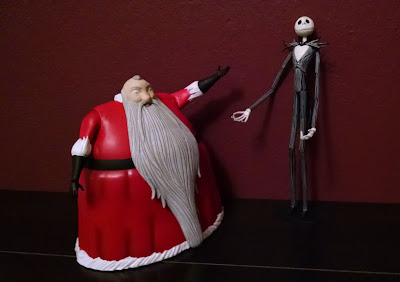 This isn't a great toy, but it's not unreasonably priced. Skipping the display piece shaves about ten dollars off the price - I got this at Toys R Us for fifteen bucks, which is pretty reasonable for a six-inch action figure, even if it is barely articulated. In particular, this is a great option for those of us who picked up some of the NECA figures and always wanted a decent Santa to go with them.
Erin Snyder Toy