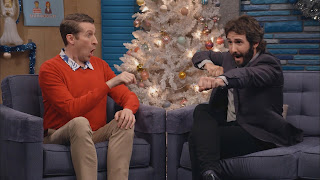 This is a weird holiday episode, even for this show. The premise is that global warming, driven by Aukerman's burning of styrofoam cups, causes the sea levels to rise until a beach literally bursts through the wall of the Comedy Bang! Bang! set. A bunch of teenagers dressed and acting like they're out of the 1960s spill in and proceed to start celebrating the holidays. Scott starts trying to shut them down, but he has a change of heart when he falls madly in love with Ahoop, one of the teenagers.

But he's not her only admirer - the episode's secondary guest, a fake British rock star named "The Beetle, acts as a romantic rival. The character's actually played by Aukerman, too, making for some odd sequences.

If you're a little shaky on the references, you aren't alone - I spent the episode trying to figure out what, exactly, they were parodying. Lindsay, fortunately, is enough of a Disney nerd to connect "Ahoop" back to Annette Funicello. That and a little research on Wikipedia brought us to "Beach Party" and the short-lived 60s sub-genre of the same name.

This episode is quite a bit more musical than most. They go through several comedy songs reminiscent of the era being lampooned. In a somewhat uncharacteristic move, the gag isn't generally that the music is bad or the song goes unfinished (which I'm grateful for - that joke was getting stale). They do a montage of short "excerpts" that were presumably ad-libbed, but this doesn't go on too long. The other songs aren't great, but they're fun enough.

They don't actually have Josh Groban (the episode's main guest) sing much, though he has a short parody number midway through. He also offers to sing at the end, but he's turned down in a fairly amusing bit (somewhat similar to a joke Phineas and Ferb used with Kelly Clarkson in one of their Christmas episodes, though Comedy Bang! Bang! takes it a little further).

The episode culminates with a surfing competition between Scott and the Beetle with Ahoop's affections on the line. They're neck and neck until a shark shows up. Scott realizes he can win if he lets it kill the Beetle, but his conscience kicks in. He leaps off his surf board and attacks it (i.e.: he jumps the shark), and he manages to decapitate the creature off-screen.

Before even learning whether or not Scott survived, the Beetle declares victory. Ahoop then assures Scott the competition never matters - what matters is who she loves. Unfortunately for Scott, that's the Beetle.

The climate reverts, the beach recedes, and Scott and Kid Cudi share a sweet moment at Groban's expense. It's a solid ending, though the "twist" with Ahoop choosing the Beetle despite everything that had happened should be pretty obvious to anyone who's seen even a few episodes of the show.

Honestly, that's an issue with the series in general - the jokes get repetitive over time. I realize that avoiding long-term character and relationship development was a hallmark of the series, but I can't help but wonder if that was a mistake.
Comedy Episode Erin Snyder Parody