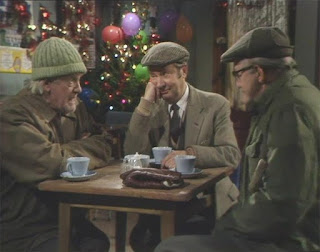 Every so often, I run across something that reminds me that despite a lot of overlap, Britain and America do not actually share one culture. After sitting through this incomprehensible mess, I discovered that the show went on for some 30-ish years... I can't even imagine.

So far as Wikipedia and I were able to put together, this show follows three elderly men through a kind of second childhood. (I had sort of hoped it was just this episode, but from the premise description online, that seems to be the show.)

In this episode, they use Christmas as an excuse to try to reclaim their youth by playing pranks, doing various implausible physical feats, and reconnecting with old school chums. They reminisce about the old days, walk on their hands (obviously fake), jump off a (slowly) moving bus, and visit a few other men who aren't exactly pleased to see them.

The actors aren't terrible, but the characters haven't aged well, so to speak. It was especially repulsive this year to sit through a laugh track reaction to a woman being grabbed and kissed while fighting and screaming. The whole enterprise felt unpleasant for me: women were only present as nagging harpies or sex objects.

Now, the men are rather pathetic, they don't seem to have any purpose, worthwhile desires, or other friends, and at least one of them lives in a room filled with junk. It was hard to distinguish what was going on at times, though, when the accents were rather thick and the cultural references unfamiliar, so I'm not sure whether we were supposed to ever sympathize with them or just laugh at them.

As mentioned, the show ran for a very long time, and perhaps it found different flavors of humor over time. It had several other Christmas episodes, but time will tell whether we are able and willing to track them down. This was the only one on my BBC Christmas Box Set. There's only so much time, and at this point, there are plenty of other terrible shows I'd rather watch.
80's Comedy Episode Lindsay