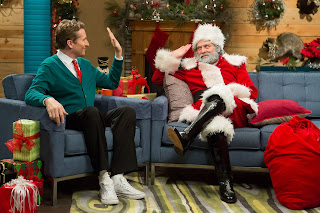 Comedy Bang! Bang! is a bizarre program, even by skit show standards. The show is ostensibly a mock talk show (mock show?), though that barely begins to describe it. Episodes can feature bizarre twists, character death, or reality warping premises. Stylistically, the twists are reminiscent of Monty Python, albeit in a far more controlled environment. Other elements, such as talking furniture, evoke Pee Wee’s Playhouse.

Every episode’s title is a mundane description of the main guest’s outfit. The Christmas Episode breaks a bit in this convention by having Zach Galifianakis play Santa Claus – usually the titular guests play themselves, leaving the fictional guests to famous comedians.

This one actually has a slightly more coherent plot than most episodes, though that’s really not saying much – telling a coherent story is not the series’s primary goal.

The Christmas episode starts with Reggie Watts, the show’s band leader (and sole member), bringing Scott Aukerman, the host, a bag of garbage. He’d been instructed to throw out the trash and bring Scott the Christmas Bonuses for the cast and crew, and he mixed it up. Initially, they panic, before remembering that Christmas miracles always happen on specials like this.

This becomes a bigger deal once Santa shows up. He agreed to be booked because he believes everyone on the show – guests included – are eligible for the generous bonus, and he’s clear there’ll be hell to pay if he doesn’t get his check.

At the end, after a speech parodying every Christmas special speech ever made, a talking ATM shows up and vomits money.

No, really, this is more plot than the show usually offers.

There are also a handful of other segments. Basically, any holiday trope you can think of gets wedged in at some point. The episode opens with a ghost of a producer showing up to tell Scott he has three guests, his “parents” stop by, and there’s even a stop-motion short in the middle.

The episode is amusing overall, as is the series. There are some clever moments; the opening and ghost were my favorite gags, though the closing monologue comes close. On top of that, Zach Galifianakis does a good job playing a pretty messed-up version of Santa.

All that said, it has plenty of misses, as well. The show incorporates quite a few jokes with an implied punchline of “this isn’t funny, and these people are bad at their job.” Needless to say, those get old in a series pretty fast. Plus, the last shot of Scott and Reggie getting teleported to Santa’s sleigh was just weird and awkward. I think that’s what they were going for, but I have to believe they could have come up with a better punchline.

Whether that comes off as engrossing or contrived depends as much on your mood as the individual joke. Sometimes I think the show’s being brilliant, and others I think it’s trying so hard to appear intelligent, it’s forgetting the basic point of entertainment.

This definitely has merits, though, and I’m glad things like this exist. We need people pushing the envelope to keep TV from getting stale, and this certainly goes in unexpected directions. Whether that makes it worth watching is fairly subjective. I’m intrigued enough to watch more, but this show won’t be for everyone. I’m fairly sure it doesn’t even want to be.