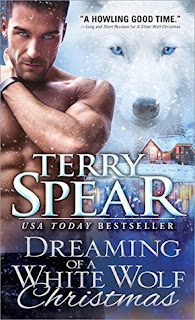 
I sort of hate that I'm spending any more time and energy on this godforsaken turd of a book.

The heroine starts out on a camping trip, where she's bitten by what honestly sounds like a fluffy puppy. After some terrible description and confusion on my part, I guess that must have been a wolf because now she's a werewolf. She sees a mysterious wolf across a river. And that's the set-up.

Two years later, she has abandoned her friends and family to live alone and write paranormal romance. The author spends endless pages introducing the male lead by recapping what sounds like at least a dozen earlier books, none of which have any bearing on the events of THIS book.

The male lead is a PI who's been hired to find her because her adoptive parents died and left her money. It's mentioned a few times that the heroine is adopted, which is a good use of everyone's time because it NEVER matters to the plot at all.

He shows up at her door (which isn't creepy at all) and it turns out that he's not only a werewolf, he's from the super-rare arctic wolf pack whose kid bit her, and he's the wolf she saw. So, of course, they immediately tell each other everything and bake cookies together. He wants to show her the importance of being around other wolves because he REALLY wants a wolf mate. Dude. You've known her for 5 minutes. Slow down.

They decide to go running as wolves and randomly get on the news rescuing some snowmobiling idiots, so then they head back to his place to lay low until the time of the month when she can safely pick up her inheritance.

Just so we're clear, this romance is the equivalent of the two middle schoolers who both have huskies deciding they're obviously meant for each other.

On the way, she grills him for details about wolf life and romance. Not for her life, for her books. WHY, if you are a supernatural creature who wants to REMAIN HIDDEN, would you write ACCURATE books about supernatural creatures? This bothered me a lot. Why wouldn't you write books that would throw people off the trail?

The next thing that pissed me off was that apparently, because wolves "mate for life" (that is a reductionist view of biology, but werewolf books tend to be terrible at biology), werewolves only have sex with the one person they're going to be with forever and ever. Well, doesn't that conveniently reinforce toxic cultural messages about premarital sex? There's also a lot of really unpleasantly possessive description and behavior from the male lead about getting her to mate with him, and competition from the other single guys in the wolf group. There's some attempted mitigation by making him unbelievably perfect for her in every way, but still. Ick.

They end up having to travel at a bad time because there's an imposter trying to pick up her inheritance. I guess that's sort of a plot. All the rest of the possible plot points come to nothing because of convenient new side characters being were-things.

Finally, she decides that he's been so nice that she should commit to him forever, and they proceed to have sex. I know it's good sex because the characters think it's good. You certainly couldn't tell from the dull, cliched descriptions.

Then they're in a car accident. And... nothing comes of it. NOTHING. It's like a book entirely about people who think they're going to have troubles, but then don't.

And she gets her inheritance, and she and the guy go back to spend Christmas with the other wolves. I didn't think it was possible, but this is an entire book of unfired Chekov guns.