By Erin Snyder - December 05, 2017
The Golden Girls was influential, remembered, and - in some ways - fairly progressive, but that doesn't mean it holds up all that well. We found two Christmas episodes (there could be more - sometimes sitcoms set episodes over the holidays without calling it out in the title).

Neither was especially bad (the first was fairly funny), but there wasn't much of significance, either. A lot of 80's sitcoms went for a sort of vapid inoffensive tone, even when they approached social issues (more on that in a moment). That was definitely the case here. The problems were minor, the stakes were low, and there was never a hint of suspense, even when the leads were being held at gunpoint.

Sorry - getting ahead of myself. 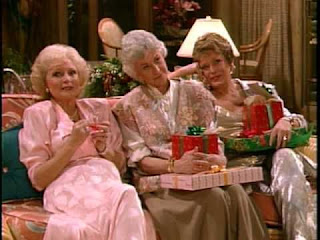 Twas the Nightmare Before Christmas (1986)

The first holiday episode, Twas the Nightmare Before Christmas (seven years before the stop-motion classic), is sort of a disjointed comedy of errors. Ostensibly, there's a story tying this together, but really it's structured in three separate shorts.

The first segment is spread out over a couple weeks. After a brief aside about Blanche's fetish for men dressed as Santa (I wonder if this is where Bad Santa got the idea), the four women debate the commercialization of Christmas then decide to exchange handmade gifts that year. We cut to the night before Christmas Eve, when they're exchanging gifts and reiterating the two themes that permeate this series to the core: Rose is dumb and Blanche sleeps with a lot of men. To be fair, the cast wrings an impressive number of laughs out of this material.

The episode breaks for some commercials, then returns the next day at Rose's work. Dorothy and Blanche head in to pick her up, so they can drive to the airport and fly to their respective hometowns to spend the holiday with their families. Rose has a few minutes of work left, so she asks them to wait.

Enter a man dressed in a Santa suit, who pulls the gun I mentioned five paragraphs ago and demands everyone spends Christmas with him. He never comes off seeming dangerous - just goofy - and the women are more afraid of missing their planes than losing their lives. Eventually Rose tells him off with some pretty obvious platitudes. Then Sophia, angry at waiting in the car, shows up, plucks the toy gun out of Santa's hand, and scolds Blanche for not realizing it was a fake sooner. They take off for the airport, just in time to learn that the airport's closed due to a freak storm.

Because of course it is.

The last act is spent in a diner, where the waiter mistakes them for family, reminding them that, yeah, they kind of are family, so they shouldn't feel bad as long as.... ugh. You get the drift.

They decide to pay him back by offering to watch the diner while he runs home for an hour to spend Christmas with his family. The episode ends with it starting to snow in Miami, though they keep this from getting too saccharine with a clever twist with the jukebox.

Have Yourself a Very Little Christmas (1989) 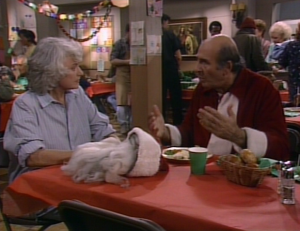 I'm trying to remember if there's ever been a time jumping ahead three seasons has ever been a good thing. Regardless, it wasn't here. This episode does have a more defined plot, not to mention a slightly darker tone, though I didn't find either endearing.

This one largely centers around Dorothy's ex-husband, Stanley. He shows up briefly at the beginning to try and sell the women on a get-rich-quick idea of his. After Dorothy throws him out, the women discuss the commercialism of Christmas and resolve to do something different this year....

I guess the writers figured everyone would have forgotten that they used the same opening a few seasons earlier.

At least their solution is different. They decide to draw names from a hat, so they won't have to do as much unnecessary shopping (i.e.: secret Santa, minus the secret). Most of the jokes here center around no one wanting Rose to draw their name. But eventually Blanche loses out, not that it matters - Rose gets her something she likes, anyway.

After this pointless aside, the characters all head over to volunteer at a church soup kitchen, and everything takes a nosedive into melodrama. The patrons are almost entirely homeless families down on their luck. All of them, kids included, are quiet and depressed.

Among them is Stanley. Turns out, his last scheme to import toy firetrucks driven by Santa crashed and burned more than he let on. Also, his wife threw him out for cheating. Dorothy spends an exorbitant amount of time trying to get him to stop feeling sorry for himself, instead of just letting him eat his Christmas dinner in peace. Eventually, she hands him some cash, so he'll stop making all the other homeless depressed (yeah, I don't get it, either), and he takes off. But he comes back dressed as Santa with a sack full of the aforementioned toy trucks, which really turns everything around for the kids.

So... I guess someone learned a lesson or something? I don't know - it was mainly just a reminder of how bad shows in the 80's were at portraying homelessness. This wasn't quite full-on Dickensian orphans, but it wasn't exactly a realistic depiction of poverty, either. I guess that would have required actual effort. Also, it might have meant acknowledging volunteering at a kitchen or dragging in a sack of toys aren't real solutions. The 80's wanted social issues to be easy.

When it wasn't trying and failing to be relevant, this one still had a few laughs, but not nearly as many as the earlier episode. A lot of standard sitcom fatigue issues had crept in - characters had grown even more entrenched in their one-dimensional traits, the jokes were less sophisticated, and everything felt more artificial.

The earlier episode still had plenty of problems, but it was fine as inoffensive entertainment. I wouldn't recommend hunting either down, but the first was by far more enjoyable.
80's Comedy Episode Erin Snyder