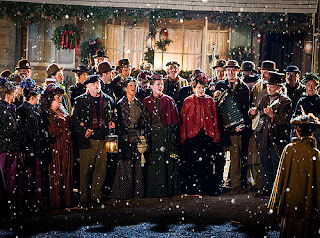 At first glance, this seems to be the type of historical melodrama that the BBC does so well. At second glance, it's still that, but includes a ghost.

The show is based on a series of semi-autobiographical novels about a teenager who moves from a very small village (Lark Rise) to the nearby larger town (Candleford) to work at the post office near the turn of the century. It seems to be notable because it's a microcosm of the changing cultures and economy of the time.

Laura (the teen referred to above) is thriving in Candleford, under the wing of her mother's cousin, Dorcas, who is educated and independent. It seems that Dorcas will be alone for Christmas, and Laura feels guilty and wants to keep her company. Laura's mother, meanwhile, is worried that Dorcas is replacing her in Laura's heart. Attempts to be polite ("No, it's fine!") on all sides make everyone unhappy until they start being honest with each other.

The patriarch of the Arless family has returned from sea to delight his many children with tales of far-off places. His wife (played by Dawn French in a perfect blend of pathos and humor) is terrified that he will leave Lark Rise again.

A pair of snooty sisters who run a dress shop in Candleford have a hostile falling-out over priorities and unspoken rivalry.

An elderly layabout recruits the eldest Arless boy to make money by singing carols, and he promises he won't spend it on drink. 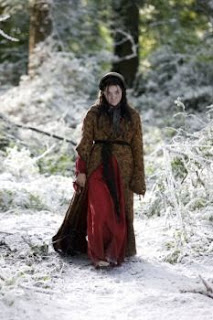 All of the above stories are gently woven together by the presence of a ghost. A girl in red walking barefoot in the snow appears to many of the residents, and most try to help her. Her whispers seem to cause people to blurt out things in anger or sadness that they might not otherwise say, complicating many of the characters' lives. The other characters finally figure out the ghost girl's history and, with local wise woman Queenie, help her to move on.

Now, this is far from perfect. From a skim of the synopses, this is the only overtly supernatural episode of the series. The ghost's refrain "The wind do blow" pushes the melodrama over the top into something rather silly.

But it was fun, if a bit long. If you like costume drama, it's a perfectly pleasant way to pass the time.
00's Drama Lindsay Special