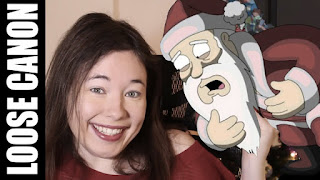 I stumbled across Lindsay Ellis's YouTube channel somewhat randomly, and it almost immediately became one of my favorites for essays on movies and pop culture. Stylistically, I'd describe it as a blend of a great college lecture and an energized barroom discussion.

Like most successful YouTube channels, it's broken into several ongoing series. One of these, Loose Canon, examines a character or concept as it reoccurs in media. Ellis has made installments on figures as diverse as Starscream and Hades - she's not constraining herself to any specific type of character.

Of course, we're a tad more limited in our focus here, so we'll be looking at her episode on Santa Claus.

It opens with some backstory on the character, summarizing three of the most significant figures who were compiled into the modern day incarnation. She condenses the history and origin of Santa Claus about as succinctly as I've ever seen. Then she moves onto The Night Before Christmas before moving onto the 1898 Santa Claus movie and more modern incarnations.

With this out of the way, she moves into the main theme of the episode - innocence versus transgression. That was probably a good choice - I can't think of a more interesting spin on Claus that would permit as broad a survey of what's out there.

The episode offers a good overview, though there is something missing from Ellis's timeline. L. Frank Baum's 1902 book, The Life and Adventures of Santa Claus, serves as a missing link between the folkloric character of the nineteenth century and the fairy-tale figure he grew into. The Claus of Rankin-Bass is lifted from this (they eventually did an official adaptation, but you can see elements from the start). It's also the origin of the "kidnapping of Santa Claus" motif, as well as an army of magical creatures assembling into an army in his defense. She discusses later media incorporating this trope, but she's missing its genesis.

Beyond this, I don't have many complaints with the video essay. Given she was focusing on transgression, I suppose she could have delved further into the killer-Santa sub-genre, but given how awful the vast majority of those movies are, I can't fault her for not doing so.

Overall, the episode does a good job demonstrating the range of Santa's appearances in film and tying that back to the central idea - that Claus's portrayal in media demonstrates an ongoing struggle between the ideals of childhood innocence and a subversive response. And, as always, Ellis offers some great humor along the way.

That said, I didn't find this as compelling as some of the other videos I've seen from her. At the beginning of this, she points out that Santa Claus is an obvious character for this series. I think she's right about that, but it introduces a problem - there are so many incarnations of the character in TV and film, there's not as clear a core to latch onto. I definitely recommend checking out her videos (this one included), but I'd suggest starting with a different installment.
2016 Comedy Documentary Highly Recommended Short