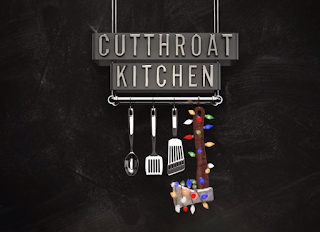 Cutthroat Kitchen is a cooking competition show about invention, adversity, and screwing over your opponents. We really enjoy it.

Like many competition shows, one contestant leaves after each round. Each round consists of a challenge and a set of sabotages. Each contestant starts with $25,000 that they can use to bid on these sabotages and disadvantage other contestants. The winner gets bragging rights and whatever money he or she has left. Winning (or doing well) is usually a combination of bidding strategy, luck, and the inventive skill to change your plan on the fly and MacGyver weird foodstuffs into something that's both edible and fancy-looking.

This special Christmas episode features Chefs Keith, Kelley, Angelo, and Phillip. The set is decorated, and the challenges and sabotages all follow the holiday theme.

In round one, the challenge is "ham dinner." Angelo spends a good amount of his starting cash to win all the sabotages (sold together as a set). This means that each of the others in turn choose a sabotage. Keith has to cook in tiny metal ornaments, Phillip gives up his ham in exchange for a ham sandwich, and Kelley has to use a set of weird hand tools tethered to an ugly Christmas sweater. Halfway through the round, Phillip ends up saddled with a second sabotage and has to carry a bag of toys, losing the use of one hand. 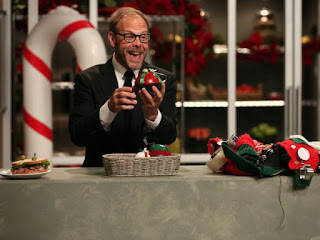 The only one who seems seriously hampered by the sabotages is Phillip, who gets dinged by the judge for the taste of the ham. Unfortunately for Kelley, she makes some serious execution mistakes, not even caused by the sabotage, just inattention and rushing, and she is sent home to the strains of "Auld Lang Syne".

In round two, the remaining challengers are told to create a "cocktail party" by creating a mixed drink and an h'orderve. Phillip wins the first sabotage, which takes away the groceries from the other two, forcing them to find all their ingredients in a pile of wrapped Christmas presents. Angelo wins the second sabotage and forces Phillip to cook on a candelabra full of heat gel.

I think Phillip was very lucky in this round. He spent most of the cooking time trying to cook shrimp over the candelabra, and it actually ended up cooked! Host Alton Brown explained to the viewer that he could have done it better using a pan. I thought that since the rest of his dish was a tartare, he could have skipped the shrimp for a base that didn't need to be cooked.

The dish eliminated was Angelo's, though, because his drink wasn't well-balanced and it didn't go with his h'orderve.

The final challenge was holiday cookies, and Phillip got really lucky. His dish was good, but not very pretty. Keith, meanwhile, decides to risk it all and doesn't buy either sabotage that round, despite still having all of his money. He ends up having to scavenge ingredients from a gingerbread house and cook over a fire. He still manages to come up with something intriguing and fun! However, if he'd bought one of those sabotages, which he could have done easily, I think he would have won. As it was, spending money was the key to victory in this episode.

We enjoy this show because it makes people think outside the box and take risks, and it's very silly. It doesn't just judge culinary talent, but interpersonal strategy, game theory, and wild-ass inspiration. We liked this episode because it had all of that, plus a cheesy Christmas soundtrack.
2014 Episode Game show Lindsay Reality