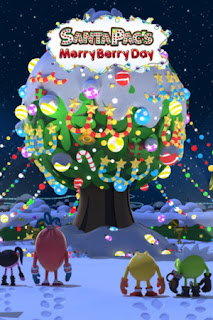 I've long championed the theory that any premise, regardless of how seemingly juvenile or misguided, can be elevated to greatness if the core concept is simply taken seriously and complex emotion is added. Movies like Cloudy with a Chance of Meatballs and shows such as My Little Pony: Friendship is Magic lend credence to this idea.

It is a good theory, or - more accurately - it was a good theory. In the space of 44 minutes, this idea was tested and soundly, undeniably refuted by a corporate cash grab so cloying, the very core is beyond salvation.

But I'm getting ahead of myself. Let me tell you about the show, Pac-Man and the Ghostly Adventures.

Note I said relatively serious - this is still supposed to be funny (though perhaps they should have tried harder). But the jokes are more decoration than the point. The central character, Pac-Man, is a young yellow pac-person, perhaps the last of his kind on a world still recovering from a devastating war. Pac-Man longs to be reunited with his parents, a pair of heroes who I guess are are off having adventures in the cosmos or something.

The ghosts are pac-people whose bodies were stripped away (though if I'm reading Wikipedia right, they're not actually dead). They're trapped in the "Netherworld," which I'm assuming is located in a parallel dimension to Pac-World. They're commanded by a tyrannical overlord named Lord Betrayus, though the four named ghosts from the original game are secretly aligned with Pac-Man.

On its own, it almost feels like this could work as a fairly generic genre premise. And maybe it could have if it weren't for the fact that the characters are ovals with arms and legs and the main character is paccing Pac-Man.

The answer seems to be unusually convoluted. The first half is the 2015 episode, "Santa-Pac," which chronicles a fairly generic Grinch retelling where Betrayus kidnaps Santa to stop Christmas Life Day Hearth's Warming Eve Berry Day from coming. The second half is the sequel, a 2014 episode called "Happy Holidays and a Merry Berry Day," set a year later.

If you noticed that the second half was made a season before the first half, it means you're paying too much attention to this review.

I guess the second half was written as a prequel. I'm not sure why - they could have just inverted the order with a few minor changes.

Back to the first half. Pac-Man starts out depressed because he misses his parents around the holidays. But Berry Day is coming, so his friends convince him to get in the spirit. Meanwhile, we learn that Betrayus (I am so sick of typing that stupid name) hates Berry Day (that one, too), and decides to stop it by capturing Santa-Pac. He sets an ambush and eventually captures him after a fight sequence where Santa pulls a gun and his Rudolph analog pulls off his antlers and wields them like boomerangs.

The good ghosts inform Pac-Man and friends what's going on, and Pac-Man sets out to rescue Santa. Meanwhile, his friends use mech-suits to fight ghosts, and somehow it's still not cool. The ghosts win both fights, capturing Pac-Man in the Netherworld with Santa and stealing all the gifts from Pac-World. Betrayus thinks he's won until he watches the inevitable "Christmas came just the same" moment. Then, in a fit of rage, he accidentally releases Pac-Man and Santa. Pac-Man eats a power pellet, giving him ice-power, which he uses to fight their way out, taking back the stolen gifts with his infinitely long, super-strength tongue.

It's possible I may have skipped over a few details when I was summarizing the premise.

At any rate, there's a big celebration and Pac-Man hopes aloud he'll see his parents next year, a wish overheard via surveillance. Cut to next year in world and year before in production order.

The villain this time isn't Lord Betrayus Sneakerus Spheros, which is great, because that has to be the stupidest villain name in the history of the Universe. Instead, it's his adviser, a mad scientist ghost named Dr. A.H. Buttocks. I... stand corrected.

Buttocks builds a pair of clone pac-people who masquerade as Pac-Man's parents. They show up claiming they need Pac-Man's help to purge themselves of nanite trackers their enemies exposed them to. They say they need his help reaching the Tree of Life to get rid of them. He buys their story and leads them to the tree, where Buttocks has tracked them. Everything gets revealed, there's a fight, and Pac-Man saves the day.

It's not that these were worse than a lot of other stuff we've seen; it's just that the basic premise behind the show is so incredibly stupid, I found it impossible to care about any of the rest. Even setting that aside, the jokes are rarely funny, and the action and characters are underdeveloped.

The Santa half makes use of the kidnapping of Santa trope which I believe was invented by L. Frank Baum. Actually, having ghosts emerge from the Netherworld to do the kidnapping is surprisingly faithful to the concept.

Needless to say, you shouldn't bother tracking this one down. It's weird as hell, which I usually appreciate, but it's more committed to its premise than it should be.
2014 2015 CG Comedy Episode Erin Snyder Science Fiction Special