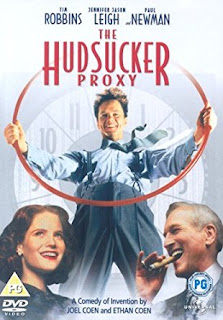 I've been meaning to get around to this for a few years now. All I really knew about it was that it was set around the holidays, and it's something of a cult classic. In hindsight, I had no idea what I was getting into.

Where to begin? This was written and directed by the Coen Brothers, along with a little help from Sam Raimi. It's sort of a love letter to classic Hollywood love stories - I'm pretty sure I caught echoes of Christmas in July, Meet John Doe, and The Apartment - delivered with a twisted sense of humor.

The movie doesn't hold back on style - from the beginning, this is unapologetically grandiose and stylized. Everything from the music to the acting to the set design sets out to create a world that's a living, breathing caricature of its source material.

For those of you who don't know me, all that means I absolutely loved this bizarre, quirky movie.

I'm not going to delve into quite as much detail around the plot this time, both because it's not really the main selling point, and because I'd have to go over some extremely specific twists and nuances just to provide an overview that made sense. Structurally, this is a deceptively complex picture which partially relies on tone to tell its story.

I will say the premise centers on Norville Barnes, a college graduate trying to get started in New York, who takes a job in the Hudsucker Building in 1958. He's almost immediately promoted from the mail room to CEO after the previous boss jumps through a window on the 44th floor and the board decided to fill the position with an imbecile in order to sabotage the company, allowing them to purchase a controlling interest on the cheap.

I don't think it's giving too much away to say the resolution includes what may be the single greatest use of deus ex machina I've ever seen. Logically, it's a moment that should be completely out of left field - it should ruin the movie - but because of how meticulously the film's setting was created, it comes off as natural, even poetic.

I should probably mention the downside to remaining this thematically faithful to old Hollywood productions - this movie isn't exactly a shining example of diversity. As far as I can remember, there was one and only one black actor with a speaking role, and he is literally magical. All that being said, I'd be lying if I said I didn't love every moment the character in question was onscreen, despite the problematic aspects.

The holiday elements here are fairly light. There is a Christmas party, but it's not particularly significant. Ultimately, this is a New Year's movie, more than a Christmas one. But since the entire story plays out in December, it qualifies for our purposes.

More than that, its connections to the holidays go a bit deeper. At its core, the story is a variation of "the Sacred King" motif from Frazier's Golden Bough - a theoretical mythical archetype serving as a symbolic king for the purposes of being sacrificed. The Sacred King has become intertwined with both Christmas and New Years for reasons too convoluted to get into here. The short version is the Christmas/solstice connection to the Sacred King probably isn't all that old, but enough writers in the last hundred years were convinced otherwise to make the point moot (I'm going to have a lot more to say on this subject elsewhere - stay tuned).

I'm not sure whether this archetype was intentional, though it wouldn't surprise me in the slightest. The movie makes heavy use of circular symbolism pertaining to the rim of a clock, the rotation of the earth, and some other details I'd rather not spoil. The cyclical nature of time lends itself to the idea of the Sacred King, particularly if you want to tie in the winter solstice (which - while offset by a week and change - the movie definitely symbolically evokes during its climax).

Sorry for being vague - I really don't want to spoil the ending of this wonderful film.

Whether its December setting was intended to evoke the Sacred King or just play off old Hollywood love stories set around Christmas (or both), the film ultimately feels like a companion piece to the holiday classics I've already mentioned.

This one is highly recommended - check it out. If you have the patience to sit through a few classics first, it will only improve the experience.
90's Comedy Erin Snyder Highly Recommended Movie