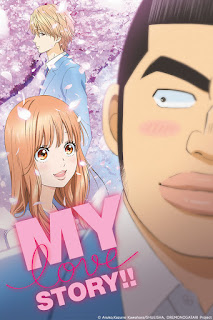 I've been enjoying the show Ore Monogatari!, released in English as My Love Story! The show follows Takeo, a high school student navigating love, friendship, and life. He's a huge person with a lot of physical ability, but that means girls generally think he's "weird" or "scary." In the first episode, that changes, as he and Yamato fall for each other immediately. The series follows the ups and downs of their relationship and their friendships in a way that's sweet, sensitive, and surprisingly complicated for two characters who are so good-hearted.

In this episode, it's Christmastime, and Yamato suggests having a party with her friends from her all-girls school and Takeo's friends. This isn't the first time they have all gotten together, and Takeo's friend Kurihara confesses to Takeo that he wants to date Yamato's friend Nanako. At the same time, Nanako confides in Yamato that she and Kurihara have been out together, but she's not sure if he wants to be a couple.

This setup is a good example of how Christmas, especially Christmas Eve, is celebrated in Japan: it's seen more as a romantic holiday for couples.

Takeo and Yamato decide that it would be great to help their friends' love story happen, and they find plenty of excuses to push the two together at the Christmas karaoke party. This backfires when Kurihara is too scared to tell Nanako how he feels, brushing her off with a "We're friends!" She leaves the party soon after, but when Yamato and Kurihara come after her, the girls are hassled in the hallway by a group of tough guys. Kurihara turns and runs to get Takeo for backup. This is the last straw for Nanako, who can't believe he didn't stand up for her.

Takeo and Yamato feel bad that they made things more awkward for their friends, and the episode highlights how both of them have trouble understanding people who don't feel the kind of uncomplicated, earnest love they have for each other. 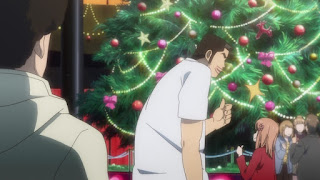 Kurihara finally decides (after some frustrated ranting by Takeo) to prove he's at least a little bit manly by climbing a Christmas tree to fetch a lucky ornament to present to Nanako with his profession of love. Nanako returns in time to see this, and the two get together, each claiming to love the other's negative qualities.

The episode closes with each seeming completely different to their friends now that they have a significant other, so both Takeo and Yamato seem to wonder whether it will work out after all.

This isn't the best episode of this show; it has some awkward gender dynamics and the relationships don't make much sense without the background. I do think the show overall is a funny and sweet experience despite a few awkward jokes here and there.
2015 Anime Episode Lindsay