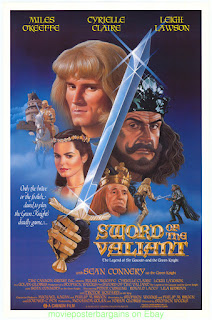 Sword of the Valiant is an '80s remake of the 1973 movie, Gawain and the Green Knight, made by the same director, largely using the same outline and themes. Please understand when I say it's an '80s movie, I mean that on every level - the decade oozes out of every lighting choice, every haircut, and every music cue. Both Gawain and the Green Knight look and act more like they stepped out of an episode of He-Man than anything in the actual live-action He-Man movie (same goes for the soundtrack, honestly). This is unquestionably a bad movie, and I savored every minute.

The plot is functionally identical to the director's previous adaptation (loose adaptation, remember: these movies are really a blend of several Arthurian myths with Sir Gawain and the Green Knight almost serving as a frame). That said, there are several new characters and minor changes to the story. A friar appearing briefly in the '70s movie is given a major role as an eventual companion of Gawain's, Morgan le Fay is given a minor role in which she's turned into a frog (in a fairly sexist turn, the movie inverts the power dynamic between her and the knight), and Linet (Gawain's love interest) turns into a bird at the end, because she needs to go back to the magical land outside of time or something. The largest change involves the addition of a "riddle" Gawain must solve to escape the Green Knight's game, with the caveat the movie treats its solution as more of a scavenger hunt than an actual riddle. It's sort of a structural change, as it ties everything back to the Green Knight's game and allows him more screen time to orchestrate the events (think the Greek gods in Clash of the Titans), but it feels entirely superfluous.

None of that really matters, though, because the story is ultimately irrelevant. The '70s movie attempted - and to some extent succeeded - in holding itself together using title cards and narration. It made for a relatively dull experience, but it gave the whole thing the flavor of an educational video. Besides, there wasn't much worth paying attention to aside from the narrative.

This takes the same basic idea, some of the same dialogue, and several of the same shooting locations, then goes in the opposite direction in the hopes of delivering something more like Conan the Barbarian. It doesn't remotely succeed, of course, but in the process it creates something you kind of need to see to understand. For better or worse (mostly better, for my money), this movie is bonkers.

A lot of that's thanks to the casting. Sean Connery plays the Green Knight, John Rhys-Davies plays Fortinbras, and Peter Cushing plays a seneschal, to name a few. Apparently, they considered trying to get Mark Hamill for Gawain but went with Miles O'Keeffe instead (pity - casting Hamill and Cushing together again would have been even more hilarious).

If you care about the movie's themes, they're ostensibly the same as in the last movie, with the caveat nothing really has much thematic weight here - this adaptation is more style than substance. That said, they still call out the turning of the year and the implication that has for the Green Knight. Also for Linet - her transforming into a bird is likewise due to the ending of the year (don't ask: it's not explained, and if it were, it still wouldn't make much sense).

The production values on this are significantly better than the '70s version, too. I'm not saying the costumes are good, but it at least seems like some effort was expended. Same goes for the action choreography - it's completely ridiculous, but I think they were trying.

I do want to take a moment and call out the Green Knight's armor, which is absolutely hilarious, and yet... it at least offers a touch of that pagan flavor they were supposedly trying to imply in the previous film. I mean, here it looks like it's made of plastic, and there's a massive opening in the chest Gawain conveniently uses to stab him at the end, but - hey - baby steps. This was released thirty-seven years before anyone actually pulled off the look.

Obviously, I can't recommend this as a decent adaptation of Sir Gawain and the Green Knight, nor does this really feel like much of a Christmas movie (I'll defend its inclusion here on a technicality, but this barely bothers hiding the fact it's more interested in flashy armor than in thematic resonance). However, as a ridiculous, cheesy '80s fantasy highlighting all the so-bad-it's-good absurdity that decade had to offer, this is just delightful.

Frankly, it's worth seeing just to watch Connery chew scenery in the second most absurd costume he donned in his career.