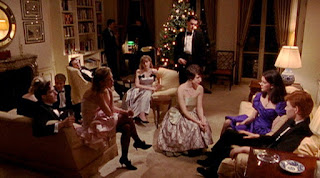 I'd never watched (or as far as I can recall even heard of) this movie prior to seeing someone on Twitter assert it was a Christmas movie, a claim I initially doubted skimming the synopsis. I became more optimistic watching the trailer, as holiday decorations can be seen in every other shot, give or take. So I decided to give this a chance.

First, I can confirm this is absolutely a Christmas movie, at least according to the definitions and litmus tests employed at this site. Granted, all such definitions are inherently subjective, but I think it's worth pointing out that our subjective definition is objectively superior to any other found on the internet. If you disagree, I don't know what to tell you: that's just science.

More importantly, this movie is goddamn hilarious, or at least that was my take. Lindsay found moments funny but overall was kind of bored. I suspect that's a common reaction to this film - the humor is an unusual combination of over-the-top and deadpan. If you don't click with the style, you're likely to get tired of the constant banter, bizarre characters, and the lack of tangible stakes. However, if this does connect with you, you're in for a real treat. After one viewing, I'm ready to list this among my all-time favorite holiday comedies. I had a blast.

Metropolitan is centered around a group of upper-class college students hanging out over Christmas break. Their social calendar is largely defined by debutante balls, though the majority of the movie is set during parties and gatherings after these events. The characters - particularly the men - are all extremely well-read and are able to converse on numerous academic topics. However, it quickly becomes apparent their knowledge is primarily regurgitated: they're far less adept at developing ideas of their own, and their understanding of the world and their place in it is comically simplistic and outdated.

Early in the movie one of the group tells Tom (the movie's main character) that the women in their group are sheltered and need the men present to protect them. The remainder of the movie then illustrates how hilariously wrong this is. The young women seem all right when it comes to making decisions and growing as people, while the men practically trip over their own feet trying to navigate the dynamic of the small group - they are completely unequipped for the larger world.

The plot, to the limited degree the movie has one, centers on Tom, who lacks the seemingly infinite resources of the rest of the group. Tom still comes from money, but a divorce and a somewhat absent father place him in a different tax bracket. Despite this, he's a graduate of the same private schools they come from and part of the same extended social circles.

After joining the group somewhat by accident, he forms friendships with several members of the group, particularly with Audrey, who secretly has a crush on him. Tom is pining over an ex, who still shows some interest in him, and he doesn't realize that Audrey's interest goes beyond friendship. By the time he realizes and discovers he shares those feelings, he's already accidentally broken Audrey's heart. He learns she's gone to a party in the Hamptons held at the home of a man with a sordid history around women. Fearing the worst, Tom and another guy who has a crush on Audrey decide they need to find a way to reach the party, despite lacking licenses.

This eventually results in them taking a taxi the entire way, where they find... very little, actually. Audrey is fine, albeit somewhat bored. Said guy is a jerk, but he's not really dangerous, making the whole thing feel kind of trivial. Tom's big romantic gesture is appreciated, and Audrey's happy to start up a long-distance relationship, but it's not like he was saving her from anything.

I realize all of that sounds pretty dull, and to a degree it is. This isn't an epic, and the protagonists aren't heroes. This is a story about sheltered, rich kids who mean well enough but lack the maturity to interact with other people in meaningful ways. The humor comes both from the realization the characters are as hopeless as they are, as well as from numerous details. This is a movie that rewards attention to the surroundings and the dialogue, even when that dialogue is centered on superfluous topics.

Metropolitan makes a point of lamp-shading the archetype it's using when it makes Jane Austen - or rather critiques of Austen - a central point of debate between the two main characters. As far as I can tell, this isn't an adaptation of any specific Austen novel, though...

In the interest of full disclosure, I should confess I *also* haven't actually read any of Austen's books. Fans of the movie will understand.

Regardless, the movie offers a playful look at wealthy aristocrats and has a great deal of fun at their expense. I don't think the style of humor is going to work for everyone, but I absolutely live for this stuff.

Now then, let's talk Christmas. Or in this case, anti-Christmas, because the movie's relationship with the holiday is somewhat inverted. It's explicitly set around Christmas, with decorations constantly present and title cards set in relation to the holiday, but the social lives of the characters are instead fixated on debutante balls. Christmas is sort of an afterthought, mentioned a few times in passing but not all that important.

The movie plays with this using those title cards, most directly when it tells the audience it's Christmas then immediately brings up a second card highlighting it's now the period after Christmas. The holidays hold little meaning and less sway over these people's lives - they exist in their own little world which operates according to its own rules.

In a sense, Christmas is used to make them feel even more alien and disconnected. These people aren't part of our world, and frankly don't seem all that good at managing their own. It's a fascinating and unusual use for the setting.

On top of that, you could also make a case that the film features themes of reflection and recreation that are often tied to the holidays (and to New Years in particular). That said, these themes aren't remotely unique to holiday entertainment, so take that with a grain of very expensive imported salt.

As much as I loved this movie, I do need to mention one element that doesn't age well. There's a recurring theme of one of the women being shamed for being sexually active. To be fair, I think the movie ultimately was trying to imply this was foolish, as the character ultimately seemed comfortable and capable (far more so than the hypocritical man who kept needling her about it). Still, she was the butt of quite a few jokes, and if the movie had meant this as a critique of "slut shaming," I don't think it comes across.

Provided that isn't a deal-breaker for you, consider this one highly recommended, particularly if you enjoy cerebral humor or cultural satire and are willing to tolerate oblivious protagonists.