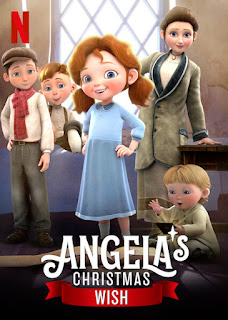 A few years ago, we were surprised and delighted by Angela's Christmas, which was a joy in basically every way. I actually remember seeing that this sequel existed last year, but I was hesitant about it. No more source material plus a lot of good press for the first one could easily lead to something rushed and poorly written. And even in the best-case scenario, what could possibly live up to the first special?

Well, not this, but it's still very good. Funny, charming, adorable, uplifting, and really grounded in ways that animation often isn't. It's just not, you know, transformative children's media. If you liked the first one, I recommend you check this out. If you didn't see the first one, go watch that!

In the first few minutes, we find out that Angela's mom has promised a "special surprise" for Christmas this year. No amount of enthusiastic chatter from Angela about a pretty doll in the toy shop could fool any viewer older than Angela herself about the subject of the surprise, but that's for later.

After updating her buddy the Baby Jesus figurine about her life, Angela and her family head home from church. We learn that a neighbor's cow is pregnant and doing poorly, but Mr. McGinty doesn't have the money for the vet. Angela's mother has been impatient and cranky in recent days, continually cleaning and sprucing up the house. The kids gripe about working on Christmas Eve, and she relents long enough to tell them a story. The story features a genie granting wishes to a king and a pauper. The king wishes for all the gold in the world, but regrets it, while the pauper is happy with his wish... which the mother says they'll find out later.

Banished upstairs to clean their room, the kids talk about their mom, and the eldest suggests that she's missing their dad because of the holiday. Angela and Pat, the middle kids, decide to try to bring their dad home to surprise their mom.

After their attempt to dig to Australia in the backyard is foiled, they head to the library for some research. Due to a misunderstanding about how atlases work, they think it isn't very far, so they raise some money busking (singing a song Angela wrote) for a train ticket.

They also stop in at the vet's to try to convince him to help the neighbor's cow, but he belittles the kids and their mission, declaring that if they can actually bring their father home from Australia, he'll help the cow.

However, Dorothy, the vet's daughter, declares that she's going to help them. They realize a train won't work, and they try to get on a boat. Shenanigans ensue, and all the kids are eventually escorted home by an amused police officer, smudged with coal but otherwise okay.

Angela and Pat explain what they were trying to do and apologize for not being able to succeed. Their mom then tells them the rest of her story from earlier: that the pauper wished only to be happy. She encourages them all to wish for whatever will make them really happy, and when Angela turns around...

Okay, you get no points for figuring out that their father is home for Christmas and that's both the "special surprise" and why their mother was in a tizzy of anticipation. And it's an obvious holiday-movie resolution, unlike the first special, which was anything but obvious.

But when Angela turned around, I burst into tears. The animators put so much care into a few seconds of animation to show us a real emotional reaction, full of shock and delayed grief as well as joy.

So yes, their father is home, and once they've recovered from the shock, Angela and Pat drag the whole family to the vet to make sure Mr. McGinty's cow will get the care she needs. After his experiences with them, the vet seems to have realized how much he's alienated his own daughter and seems ready to grant her wish for happiness and family togetherness as well.

All's well that ends together, in a sweet montage of the characters' various celebrations until the kids are finally asleep.

Now I can nitpick things. The script includes a few recurring elements that don't seem fully explained or followed through and the story is a lot more "standard holiday fare" than its predecessor. But those are tiny quibbles. It's really charming throughout. Enjoy.