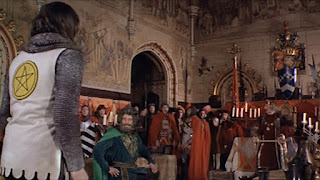 Seeing The Green Knight (2021) was a good reminder that the root story is set during and thematically linked to the holidays. Obviously, that makes the new movie a Christmas movie, which is why we just posted a pretty extensive review. The thing is, David Lowery isn't the first director to adapt Sir Gawain and the Green Knight into a feature film. In 1973, Stephen Weeks took a swing at the myth. The movie seems to be mostly forgotten - it's most notable as being Nigel Green's final role, as he passed away prior to the movie's release.

The other thing about this that makes it somewhat notable is its proximity to Monty Python and the Holy Grail. I can't seem to find concrete information about which Arthurian films Holy Grail was directly parodying, but both the timing and content make me suspect this was high on the list. Sir Gawain came out just two years ahead of Holy Grail, so it's likely Python's members saw it while planning their movie. This has title cards representing the seasons that are extremely close to those animated in Holy Grail, it's got a Black Knight who challenges the main character to a duel for stupid reasons, there's a magical character who acts and sounds a lot like Tim... the list goes on. I can't say with absolute certainty there's a connection, but I'd be surprised if this weren't a major inspiration on the classic comedy.

Now then, let's talk about plot, because this thing deviates from the source material. Like, a lot.

The beginning is relatively faithful to the Green Knight story, with a couple twists. First, we're told - quite literally told via a narrator who interrupts far more often than necessary - that the knights have grown lazy. Only Gawain, currently a squire, dreams of adventure and glory and so forth. Somewhat redundantly, Arthur opens by scolding his knights for growing lazy. Then the Green Knight shows up to challenge the court to his game.

The Green Knight, it should be noted, looks completely ridiculous. Then again, so does everyone - the costumes are more ren-faire than anything else. They're not particularly stylized nor consistent, and they're certainly not historically accurate.

The rules of the Green Knight's game are more or less the same as in the original, with the caveat he doesn't initially offer a one-year reprieve. Gawain cuts off his head, and the knight reattaches it, and...

Okay, just to be clear, this is done with cutaways and doubles. I don't know what this movie's budget was, but I'm guessing it wasn't high. The effects are pretty underwhelming, even for the early '70s.

Gawain of course sets out at once with his trusty squire, who he'll get separated from and reunited with several times throughout the movie. There are literally scenes where he wanders away from another sequence and runs into his squire in the woods. Once again, if Monty Python was referencing something else, it speaks poorly of Arthurian adaptations in general.

Soon after, Gawain sees a green light in the woods and follows it to a tent, where an old man tells him to go to the sea, use a chalice he finds there to carry some water to a green rock, and pour it on said rock. Doing so makes the weather go crazy, and then the Black Knight shows up, accuses Gawain of breaking some law, and challenges him to a duel. Gawain is lightly injured, while The Black Knight is mortally wounded and rides off towards his castle, where he dies.

Gawain follows and discovers almost everyone's trying to kill him in retaliation for slaying the Black Knight. The lady of the castle wants his head, but one of her handmaids, Linet, saves Gawain. Also this castle exists outside of time or something - I'm honestly not sure what was going on with that, but later he shows up and finds everyone frozen.

Let's gloss over a side plot where the lady of the castle changed her mind about wanting Gawain dead and wanted to marry him instead, and then Linet's magic ring teleports Gawain away. He wanders around and runs into a guy who can see the past and future but not the present. He's not much help and vanishes after revealing people call him "The Fool." This is the guy I think may have at least partly inspired Tim, incidentally.

Gawain then finds a green vine in a river, follows it up a waterfall, and returns to the castle where he last saw Linet. Now everyone's frozen in place, so he's in no real danger. He finds Linet, tosses her over his shoulder, and leaves. She's still frozen for a while, which is mainly an issue because Gawain isn't around when she finally wakes up, wanders into a field, and is captured by men working for Baron Fortinbras.

Gawain infiltrates Fortinbras's army in an attempt to rescue her, but he's eventually captured, though he escapes again, nearly rescues Linet, but is wounded and believes she dies in a fire. They're in love by this point, incidentally, so he takes the news hard, wandering aimlessly through the wilderness no longer caring if he lives or dies.

At least until he comes to the castle of Sir Bertilak, who welcomes him. He finds Linet alive and well there, having been saved by Bertilak. I'm a little unclear whether they're married, but he's the Green Knight, anyway, so who cares? It's been a year by this point, so Gawain needs to go find the Green Knight. Linet gives Gawain the usual magic green sash to protect him, though the movie skips the side plot about him and Bertilak pledging to exchange gifts, so it's basically just reduced to a McGuffin.

He heads out and runs into Fortinbras and his men. I didn't notice anyone referring to Fortinbras as the "Red Knight," but he's dressed entirely in red armor, so I think that's probably supposed to matter. There's a series of fights, and Gawain wins, before following the Green Knight, who appears on a hill. They meet in a cave, and Gawain admits he was foolish to desire fame and glory, and to ever play the Green Knight's game. He bows his head, and the Green Knight swings at him. But of course Gawain's got the green sash, so he's fine. He tells the Green Knight their game is over, the Green Knight says it's over when he says, and they have a brief fight.

Gawain sort of wins, but before he strikes the Green Knight calls out for him stop since it's unnecessary. Gawain looks down at him and sees he's transformed into an old man, who says, "The full circle of the year is turned, and just as every green shoot of spring returns to the earth, so return I," then he turns into mist and frost.

Overall, the ending feels more like a "Father Time" reference than anything else, but I suppose Weeks could have been alluding to Frazer or something similar. The movie was definitely interested in exploring the passage of time - unlike the original poem, Gawain's quest takes the entire year, a fact punctuated with title cards for each season. I assume there was some specific myth, theory, or neo-pagan concept the movie was trying to equate the story with, but I'm not entirely sure which one. Father Time is my best guess, but I wouldn't be shocked if it were something else entirely.

Whatever they were going for, it's tightly connected to the cycle of the year, with death and rebirth explicitly tied to the New Year. That's enough to cement this as a "Christmas movie" (or at least a New Years one) in my book, despite having the bulk of the story set at various points throughout the year.

Regardless, the movie isn't particularly good. Neither the acting nor directing feel particularly inspired, the costumes are laughably bad, the effects cheesy, and if you've ever seen a ren-faire joust you've seen action as good or better than anything this has to offer. On top of everything else, the narration is tedious, and coupled with the fact this is entirely bloodless, you're left feeling like you're watching something educational, despite the fact it's not remotely true to either the original lore or history.

I suppose the title cards are nice - they're stylized to evoke illuminated manuscripts. The music is also decent, though it sounds incredibly close to the soundtrack for Monty Python and the Holy Grail (I'm really not qualified to say whether this is a case of like source or direct parody, but either way it's hard not to think of the Python movie while this is playing).

I mentioned at the start this was Nigel Green's final role. As far as I can tell, Green was something of a regular in genre movies. I recognize a handful of movies on his filmography, but the only one I recall actually seeing before this is Jason and the Argonauts, in which he played Hercules.

He played The Green Knight here - and I hope this doesn't come off as insensitive - but I'm kind of surprised this isn't a bigger deal. Unless release dates are wrong, he died prior to the movie coming out, and (intentional or not) his name mirrors that of his role. A role which involved his character reaching the end of his time on earth and passing quietly. And of course, the movie spoke cryptically about how "Green" would appear as a portent - the whole thing is practically ready-made to spark conspiracy theories or Hollywood legends.

And for all I know, it may have. But if so, there don't seem to be any readily apparent. Maybe everyone thought it would be in bad taste, or maybe he just wasn't big enough to warrant that level of attention. But if any aspect of this deserved a second thought, it would be Green. His Green Knight is over-the-top and campy, but he manages to inject the role with energy and a sense of wildness, particularly at the end.

This isn't a good movie or a good retelling of Gawain and the Green Knight. It kind of grinds up several other Arthurian tales and mixes them up in a way that feels confused and lacking meaning. The beginning and end aren't awful, but they're not remotely good, either.

One last note: this is actually the first of two adaptations of this story Stephen Weeks made. He remade this under the title, "Sword of the Valiant," in the '80s, with Sean Connery as the Green Knight. That's not currently available on any streaming services, which is why I did this one first. But the clips online look bonkers, so rest assured it's high on my list of movies I plan to track down, even if that means paying more than I'd like for a used DVD.