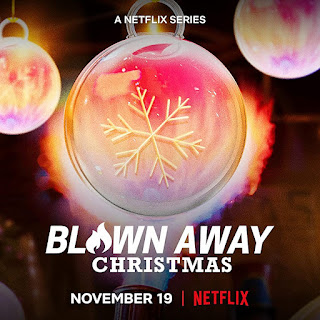 Netflix had been pushing this on me for a while, and I thought, well, I haven't watched any mediocre reality competition shows this year yet, why not?

And that's more or less what I got: a mediocre reality competition show with some pretty art and a few weird, possibly unpleasant quirks.

Apparently there have been two seasons of this glass-blowing competition show before this, and this holiday event invited five previous competitors to come back for another shot - so far, so normal for a special (or in this case, a special short season). The host for these four episodes is Bobby Berk of Queer Eye, while professor Katherine Gray is the judge.

The first thing I want to say is that, despite the show's attempts to sneak in little captions or asides that explain specific techniques or tools, I found the footage of the actual glass blowing surprisingly boring. I didn't see enough of any one piece to be able to follow it from inception to completion, and the pieces in progress aren't like half-decorated cakes, where you can see what it's going to look like and guess if it's going well. They don't look finished to the untrained eye until long after the fact. It's mostly about the cool moments - fire and sparks and breakage - which are cool once, maybe, but then are just pretty shots without much meaning.

The other big thing has to do with the selection of the contestants and the topics, which was a big yikes from me. Now, I'm sure that these contestants were audience favorites from the past seasons, that's always the case. But if you wanted these specific contestants, why is it a Christmas season?

Because out of five contestants, two (Andi and Alex) are Jewish and another (Nao) is from Japan, where Christmas is very different than in the US. Seeing these folks doing reaction interviews in "ugly Christmas sweaters" made me vaguely uncomfortable, even as they laughed it off for the camera. It was worst in the first episode, as many contestants sort of talked around the holiday topic, while the host made a terrible Christmas pun almost every time he spoke.

(Side note: the Christmas jokes were not quite as bad as the incredibly obnoxious "glass" puns.)

The first challenge was the "best holiday gift you ever received." You'll note they didn't say best "Christmas" gift, but the implication was strong. One of the Jewish contestants chose to make candy inspired by going to a childhood friend's Christmas celebration. Her abstract piece was chosen for elimination. The winner of the first episode made the most explicitly Christmassy piece: a nutcracker in a stocking. And to be fair, it's an awesome piece.

But the show clearly tries to put an emphasis on integrating the artists' personal stories with their designs, so the folks with a more tangential relationship with Christmas were at an awkward disadvantage. There are plenty of reality competition shows that don't bother with that personal angle at all, where the challenge is to, say, create cupcakes appropriate for a dog's birthday, and if you do that, you win, whether or not you personally care about dogs or birthdays.

The second challenge was "your favorite holiday food." The woman who won the first episode (Cat) won again with a complex platter of fruit and cheese, while Edgar, who made an okay plate of pie and turkey, was sent home.

The third challenge was a collection of Christmas ornaments. I was glad to see that at this point the show abandoned the "personal story" angle. The self-proclaimed "secular Jew" Alex made a cool tree inspired by ice and water vapor, but got eliminated.

In the final episode, remaining contestants Cat and Nao were each asked to create a "winter wonderland" gallery installation. Both did very impressive, cool work, although it wasn't exactly a surprise who won.

Overall, this was an okay reality competition show, the kind I might put on in the background while cleaning or something. But the Christmas angle here felt too forced, and that says a lot coming from me.