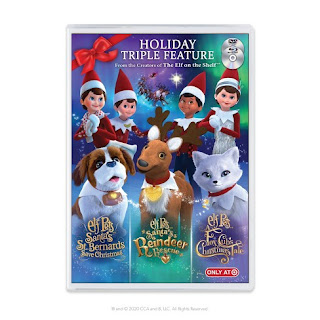 I want to start by saying upfront: you should discourage your kids from watching these.

I'm not joking. And I'm not saying that because these are awful - they are, but that's the least of their problems. These specials cross a line between obnoxious and inappropriate in how they market their toys to kids. I'm not just talking about using animation as an extended ad, either -- this goes way beyond GI Joe or Transformers.

GI Joe never explicitly told kids owning their crap would help save Christmas; these specials - all three of these specials - quite literally convey that message. You want Santa's sleigh to fly? Help by "caring for" one of these three magic toys.

I am not exaggerating. I don't recall ever seeing a show or special do anything like this before.

With that out of the way, let's talk about the specials themselves, or rather the specials as a group. While all three contain unique characteristics, the overall concept and structure is identical. All involve two stories, one about a human family that will wind up receiving one of the Elf Pets, and the other about how Christmas is threatened due to some variation on Christmas magic or spirit or whatever being in short supply, necessitating the pets be distributed to kids who will perform their part of the ceremonial magic required to fix what's broken.

All of the specials are badly written, and the animation is at best subpar bargain bin quality (and half the time it's closer to student project levels of amateur). These are all musicals, and the vast majority of the songs are painful to listen to. All that being said, each special has at least one sequence that rises to the level of decent. Still, none are worth watching, even setting aside the ethical concerns mentioned above.

I can find very little information about these online - I'm honestly not even certain the dates represent the original releases. These are currently streaming on Netflix, a fact I bring up not to advertise their availability but rather in case anyone wants to cancel their subscription to ensure their kid doesn't stumble across this.

Now then. Let's get into specifics. I'm particularly confused by the date here, as the animation in St. Bernards Save Christmas looks slightly more advanced than that in the other two, particularly around Santa's beard. It still looks cheap and awful, but in the other specials it looks like a rubber blob, while here it looks kind of like fabric. Also, the fur of the St. Bernards looks surprisingly realistic. This isn't necessarily a good thing - when the dogs show up, they look weirdly superimposed over their far less detailed surroundings. But for what it's worth, everything in this special looks and feels a touch more advanced. Or maybe they just put a little more effort in because it was the first in the trilogy.

Regardless, the slightly less awful beard isn't the aspect of this that rises to decent - that would be the "human" story, which on its own is almost passable kid's holiday entertainment. It centers around a family running a food bank. Times are tough, so there's more demand than usual. However, donations have dried up because people have forgotten the Christmas spirit. The father has a sad song about how everyone feels like something is missing and falsely believes material possessions can fill that void at Christmas, which....

Okay, hold on. This is a fucking toy commercial.

So, the critique of materialism doesn't last, because the North Pole story is focused on fixing the larger issue: there's not enough Christmas spirit to sustain the magic that makes Santa, the elves, and Christmas itself possible. They need a way to fix this.

That'd be where the dogs come in. Literally, out of the blue a big-ass St. Bernard shows up, and Santa greets him as an old friend. Then the giant dog reveals thousands of miniature puppies who want to save Christmas. "And how will they save Christmas?" you may be wondering. By being owned by human kids, who will be inspired to perform good deeds, which will generate Christmas-spirit-magic-dust, which the dogs will collect in the barrels around their necks and transmit to Santa. Also, the Star of Bethlehem is part of this somehow, but damned if I can explain that.

To be clear, the dogs appear in their official packaging in the special, complete with a book explaining the relevant lore (this will be consistent across the other specials as well). In other words, the special's solution to combat the greed and materialism of the holidays is to buy this specific toy, which will save Christmas by siphoning off energy from kids and transmitting it to sustain Santa.

That's right, kids: according to Elf on the Shelf, Santa is an energy vampire.

Needless to say, the kids do a good deed (they use their own money to buy some stuff for the food bank), then others see them and are moved to do the same. The world is once again safe from the greed of materialism, all thanks to capitalism.

The animation is pretty awful in this, but - as I said above - not quite as awful as the other two specials. Likewise, the music here is close to passable (note I said 'music': the lyrics in all of these are abysmal). I don't want to oversell any of this: none of this is actually good, but the other two specials set the bar so hilariously low, this one almost looks decent in comparison. That said, the other two each have a scene that's actually fun or neat, and this can't claim the same. 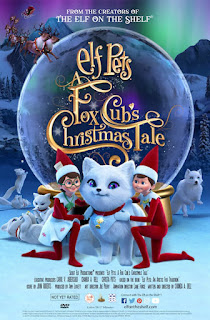 By far the hardest thing to reconcile in this Elf on the Shelf special is that it contains a sequence - exactly one sequence, just so we're clear - that's actually kind of decent.

Yeah, I was shocked, too.

It's sort of a weird scene stylized as close to modern Disney as this thing's direct-to-DVD budget would allow. I wouldn't describe most of the special that way, but this one section really looks and feels like it's trying to rip off Frozen, not quite succeeding, but still coming close enough to be interesting. The sequence in question starts with Santa sending a magic snow owl to wake a magic arctic fox, who runs across the northern tundra. Every time the fox's trail hits the snow, it summons a ray of northern light, which jumpstarts a song powered by Christmas spirit, which in turn allows Santa's sleigh to fly. Also, it pauses time.

And... yeah, all that is goddamn ridiculous, but the fox creating the northern lights is kind of cool, in a '90s new age music video sort of way. It helps that the music to this song (while generic) has a solid pseudo-Celtic vibe. You'll definitely have to ignore the lyrics, which are laughably dumb, but for a few brief moments, this thing actually manages to be fine. Not good, mind you, but fine.

Which is a nice break, because literally every other second of this thirty-minute special is garbage.

Of the three, this is the lightest on plot, for whatever that's worth. The human section is built around a kid whose mother may or may not make it home in time for Christmas as originally expected. Because of this, he loses faith in Christmas altogether. Also, faith in Christmas overall is low, which matters because that's what powers the song, and without the song Santa can't deliver the gifts.

So the fox delivers a special gift to the kid. Inside is a branded Elf on the Shelf Fox Cub. This reignites the kid's faith, giving the fox the power to temporarily summon snow on the kid's roof, which it hits with its tail, creating more Northern Lights. Also, there are suddenly like a million foxes for the elves to distribute. They capture faith, make snow, and create more of the magic-light needed for Christmas.

Once again, the real message is if you want to make sure Christmas can come, you'd better own a fox cub of your own to help Santa make his rounds. If you know what's best for you, that is.

Oh, and if you thought this special had the guts to actually let the kid's mom miss Christmas, you haven't been paying attention.

The one okay moment aside, this special is awful, both in terms of quality and content. It's poorly made, and once again its narrative exists solely as a transparent attempt to convince kids they need to buy a dumb fox toy that will collect their hope or something and turn it into Christmas magic. 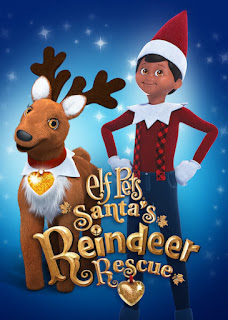 This time Santa's sleigh is malfunctioning because there's a shortage of love. His normal team can't manage, so they need additional help.

Meanwhile, over in the human world we meet a family telling old stories about an ancestor from Finland who used to look after a herd of miniature reindeer. Literally miniature reindeer - these are toy-sized (guess where this is going). I'll spare you the details, but the family moved to the US, and the deer ended up with Santa's elves.

Back at the North Pole, the elves figure out a way to make the miniature reindeer grow to full-size magically, but this requires the deer to receive a steady supply of love. How will they ever get the reindeer cuddled enough to help Santa? And why am I vomiting uncontrollably?

So, yeah, the solution is to deliver mini reindeer to kids, who will love them, so every Christmas Eve they can grow full-size and help pull Santa's sleigh.

I promised a decent moment in each of these, so here it is: the backstory is illustrated in a short 2D illustrated cartoon that is orders of magnitude better than the CG garbage used for the rest. The story is idiotic, but the visual style is solid. Also, they name-drop Joulupukki, the Yule Goat. I appreciate the attention to detail, as well as the Yule Goat ornament slipped in as an Easter Egg. Someone actually did some homework for this, which is a pleasant surprise.

But the narrative and message, sadly, are the same as ever: Santa needs kids' help to keep making his rounds, and the way you help him is to own Elf on the Shelf branded merchandise. At least this time they're not pretending to criticize materialism.

I honestly think these may represent the most cynical, blatant cash grab I've ever encountered from a toy company. These specials imply Christmas won't happen unless kids have these pets. And while the fake kids in the special might get them as gifts from elves, in the real world, you'll have to shell out some dough.

Look, Christmas as a cultural touchpoint is owned by everyone, and the lore associated with the holidays is open to revision and reinterpretation. Rudolph was a marketing ploy, and you better believe that nose moved merchandise. But there's a difference between merchandise representing lore and selling the merchandise as literal artifacts. At its best, Elf on the Shelf is snake oil for kids - mass-produced toys sold with the lie they're magic, living creatures. That's not so far removed from mall Santas and the like, so we can give them a pass there.

But when you start implying a causal relationship between the holiday and your toys, I think you've crossed a real line. These specials are, in a sense, attempting to blackmail kids into thinking they need these toys. That's an awful message.