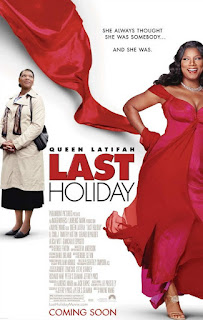 This is one of those cases where a movie's backstory is nearly as complicated as its plot. I'll try to be as brief as possible, but no promises.

The original Last Holiday, a movie I've never seen but probably should, was a 1950 British film starring Alec Guinness as a salesman diagnosed (technically misdiagnosed) with a fatal illness. Believing himself to have only a short time to live, he goes on the titular "last holiday" to a fancy resort, where he befriends a number of wealthy individuals who assume he's higher class than he is. At the end, he learns the truth about his diagnosis... only to get in an accident and die (spoiler: The remake goes with a different ending). The original was not, as far as I can tell, set at Christmas. The term "holiday" strictly referred to a vacation.

Jump ahead four decades to the 1990s, and there was a push to remake Last Holiday with John Candy. Apparently, it was relatively close to happening, but the star's death prevented it from being made. Another decade passed, and that script was updated for Queen Latifah.

And that brings us to the movie itself. I know that's a lot of seemingly superfluous context, but I honestly think it helps explain what this is, what makes it unusual, and why it works as well as it does.

The initial premise is relatively similar to the Guinness version. Queen Latifah plays Georgia Byrd (George Byrd in the 1950 version), a retail employee at a department store that underappreciates her (largely due to the new CEO's self-centered philosophy trickling down). She specializes in cookware, which is also her passion: she's an avid fan of Food Network in general and Emeril in particular (try to act surprised when he cameos at the end of the movie). She dreams of one day opening her own restaurant and also of pursuing a relationship with her coworker, Sean (played by LL Cool J). She's too timid to ask Sean out (or even give him a chance to ask her out) or quit her job, so she is stuck in something of a holding pattern...

Then, right before Christmas, she's diagnosed with a rare disease that will kill her in three weeks. There actually is a cure, but her insurance turns her down, and the cost of the procedure is more than three hundred thousand dollars. Rather than wait for death, she quits her job and decides to go on a vacation she's always dreamed of at a resort in the Czech Republic.

The hotel's restaurant is being run by Chef Didier, a fictional celebrity chef that Byrd is aware of. He's played by Gérard Depardieu, the French actor, who... ugh. I'll just leave this link here and move on.

Coincidentally, the hotel's guests include Kragen, the CEO of the department store chain she just quit. Kragen is smarmy, greedy, and is engaging in a dubious relationship with his assistant. He's played by Timothy Hutton, the US actor who... another one? Seriously?

Kragen is trying to secure political support from Senator Dillings, who represents Byrd's district and is also at the hotel. Dillings is actually a pretty good person, despite a few questionable priorities. He's played by the great Giancarlo Esposito, who [tentatively checks notes] seems to be a pretty awesome human being. Thank God.

Georgia's fearless attitude, coupled with her seeming disinterest in money, draws the attention of the staff and guests. She quickly forms friendships with almost everyone. Chef Didier sees a kindred spirit, and the Senator becomes fascinated with her. No one knows who she is or where she comes from, making her a mystery.

Kragen is less impressed. He sees a rival, particularly because the politicians he's trying to manipulate are more interested in her. Byrd is of course more than happy to watch the rich CEO who made her life difficult make a fool of himself, though it should be noted she never actually lies about who she is. The confusion is mainly due to misunderstandings and happenstance - she's not actively pretending to be anything she's not.

Most of the movie plays out in a series of sequences where she befriends another guest or staff member and learns a little more about the importance of enjoying life. There are of course introspective moments, as well, where she considers her impending demise and considers how she'd live her life differently given another chance.

Meanwhile, back in New Orleans Sean is trying to figure out what happened to Georgia. He figures out where she went and why and boards a plane, arriving in the country just before New Year's Eve.

And since one meanwhile isn't enough, the doctor who diagnosed her finally realizes there's something wrong with the machine. He also figures out where Georgia is, though he sends a fax rather than fly across the world.

By this time Kragen manages to figure out who Georgia is, where she worked, and how little she made. He smugly exposes her in front of the senator and congressman, and this goes... actually, it goes about as poorly for him as it should. The movie doesn't try and manufacture a scene where Georgia is ashamed. After all, she never pretended to be the person they imagined her to be. And since her occupation is out, she also fills in the last piece of the puzzle and lets everyone know about her illness.

Kragen, feeling thoroughly defeated, gets drunk and wanders onto a ledge, presumably to commit suicide. Georgia fearlessly goes out and talks him out of it. While she's out there, Sean finally reaches the hotel and joins them, confessing his feelings for Georgia. And before they can even come inside, a hotel employee sticks her head out to read the fax informing Georgia that she isn't going to die. The movie wraps with afterwords for the major characters, informing us things ended well for almost everyone.

This movie works in large part because it doesn't aim too high. It's easy to imagine versions of this that could have turned maudlin or melodramatic, but this never does. Likewise, they could have turned this into a farce and bombarded the audience with jokes - it doesn't do that, either. Instead, it settles in for a relatively light, comedic tone. It's not a particularly ambitious film, but it delivers on its premise without feeling artificial or forced. It's a sweet and fun comedy with a likeable protagonist, and that's plenty.

In the interest of being complete, there are a few concepts, jokes, and moments that don't work as well. The most glaring of which is the character of Georgia's doctor, Dr. Gupta, who's more or less an Indian stereotype. This movie doesn't punch down often, but he's an exception.

The other joke I'd have cut is briefer, but still made me cringe. There's a sequence involving Krager's assistant where we learn she has neck issues due to her affair. This is put in both explicit terms and framed to shame her for sleeping with a married man. To be fair, the movie immediately pivots to making her sympathetic, but the fact the power imbalance wasn't even addressed is an issue.

Aside from these, I found the movie restrained and tasteful. There are numerous leaps in logic, of course (the cost of the procedure doesn't seem to be so much more than she's able to spend on the trip to explain why she didn't at least try to raise the rest of the funds), but... come on. It's a comedy: we're supposed to suspend disbelief.

Let's take a minute to talk Christmas. This shouldn't take long, because it's barely present, at all. Primarily, it seems set during December to smooth over the colloquial differences in the meaning of the term "holiday." They either had to make the movie play out over Christmas or change the title. That doesn't mean the holidays weren't used, at all: the ending utilized the New Year as a moment for reflection and renewal. I guess if you're setting a movie like this over the holidays, you might as well.

While I don't consider this movie among the best Christmas comedies out there, I think it works incredibly well. It's funny, sweet, and effective, and the cast does great work (particularly Queen Latifah, who comes across as likable as her character). This one doesn't elevate the medium or try to be more than a light comedy, but... who said it had to? It's really good and deserves more attention than it seems to be getting. We enjoyed this quite a bit.