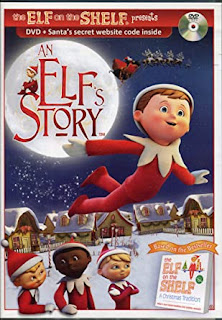 I'm torn on this. On one hand, this is a cheap ad for Elf on the Shelf, poorly disguised as an animated special. But on the other hand, it's so badly made, I think it actually may have contributed to the downfall of the brand, which is unquestionably a benefit to humanity.

The special's protagonist is Chippy, an elf assigned a very important mission to help a boy recover his belief in Christmas. The boy, Taylor, hasn't undergone any sort of hardship or anything, and aside from being kind of a dick around his younger sisters, isn't a bad kid or anything. So the stakes here are pretty damn low. This is just about Santa sending one of his minions to police the beliefs of a random upper-middle-class kid. That's it.

Chippy arrives in an Elf on the Shelf box, along with the stupid book, because we're really selling the hell out of the illusion any of this counts as Christmas lore. The family reads the book together, and we get the basic rules: the elf flies back to the North Pole every night to report to Santa, he moves to a new location when he comes back every day, and if a child touches him, he'll lose his magic. Of course, whenever anyone's around, he just sits frozen in place. More or less the old Christmas Toy rules.

At first Chippy thinks things are going well, but he hits a few snags trying to get Taylor to believe by drawing the kid's attention to various Christmas things. Taylor isn't exactly an atheist, but he wants proof. He keeps asking Chippy to fly around the room to prove he's magical. Eventually, he presses the issue, by threatening to touch the elf if he won't fly away and prove he's alive. I think the implication was that this is intended as a bluff, but accidentally or not Taylor touches the elf, who falls off the shelf. That night, Chippy manages to fly out of the house before collapsing outside in the snow, where he's seen and rescued by other flying elves, who bring him to the Elf ER at the North Pole.

I hate that I just typed that sentence.

He's in bed for a while, while Taylor feels awful. He writes to Santa and asks him to apologize to Chippy. Santa reads the letter, and Chippy regains his magic, flies into the air, and is mulched by a passing jet.

If that last part had actually been true, this would be getting a recommendation.

No, the stupid elf returns to the stupid house to spend Christmas with the stupid family. Then Santa drops off some presents, and Chippy joins the flying procession of elves behind Santa's sleigh.

So, obviously the writing is bullshit - let's talk animation. This is CG, and I'd describe the quality as somewhere between N64 and Gamecube, leaning more towards the N64. The character designs are simplistic and boring, the detail is sparse, and the backgrounds are uninspired.

The songs... I mean, for cheap kid's entertainment, they're fine, neither better nor worse than average. I guess there had to be one category this thing clawed its elven hands up to "par" in, and this is it. The musical numbers, of which there are several, aren't any more painful to sit through than the rest of this, and arguably may be a modicum less so.

Everything else is awful though. Just really, aggressively awful. Even setting aside the fact it's more a cross-promotional branding exercise than a story, everything about this is just garbage.