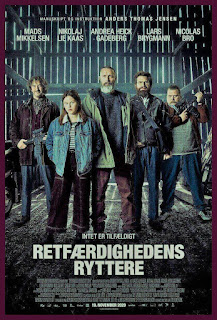 Over the past few years, I've been transitioning towards favoring original titles over translations when reviewing foreign films when practical, both in the header and in the text. Well... I've got limits, so I'm going to be referring to this film from Denmark by its English title from here on out: Riders of Justice. Sorry, Danish speakers: your word for "justice" is just a tad too righteous for me to type out.

I'm seeing this referred to as an action/comedy, which feels like a bit of a stretch. Maybe it's because I'm overly familiar with American action movies, which almost invariably include comedic beats, but I'd almost classify this as drama before comedy. Sure, it's funny, but - again - I expect that of action films. The presence of trauma is a bit more surprising.

Before considering whether it's either - hell, even before I'd bother with "action" - I'd consider this an existential film. Riders of Justice is fundamentally a movie about the search for meaning. The characters are trying to make sense of tragedy and pain; the comedy, drama, and action all spring out of that.

Before going on, I should note that while this technically meets our definition of a Christmas movie, it doesn't really feel like one. In fact, I somewhat suspect the Christmas setting may have been a last-minute alteration, as a different ending would nullify it entirely. More on all that when we get to the ending, of course.

The movie opens with a brief prologue showing a series of events that will rob Mathilde, the main character's daughter, of her bicycle. The inciting incident is another girl - one who won't come up again until the conclusion - remarking that she wants a blue bicycle. It's an innocent comment, but it results in Mathilde's bike being stolen, which eventually results in Mathilde and her mother getting on a train, which in turn is involved in what appears to be an accident. Mathilde is relatively unhurt, but her mother is killed instantly.

Also present on the train is a computer programmer, Otto, who observes a number of events that make him suspect the seeming "accident" was planned. When the police dismiss his theories, Otto reaches out to some friends to do their own investigation. He also reaches out to Mathilde's father Markus, a soldier who returns from Afghanistan to look after his daughter.

Let's take a moment to talk about Markus, because he's not your typical protagonist. I mean, in one sense, I guess he is a typical protagonist: he's gruff, no-nonsense, unwavering, interested in results rather than discussion, and he's got absolutely no patience for anyone trying to convince him to talk to counselors. He's a soldier, a fighter. A real man. In a sense, he's every no-nonsense badass from virtually every American action movie from the '80s and '90s.

It's just... none of that's presented as a good thing here. At all. He's emotionally abusive towards his daughter, who - unlike him - is trying to cope with her trauma in a mature way. And then he's physically abusive towards his friends and even towards Mathilde's boyfriend, whose only "crime" is standing up to Markus when he screams at his daughter. Even before the movie takes us through his redemption arc, it's crystal clear it's in no way endorsing or celebrating Markus's worldview.

The plot, of course, concerns Markus - aided by Otto and his team of misfits - tracking down the biker gang (the titular "Riders of Justice") and killing them. Only...

Yeah, remember how I said the whole thing looked like an accident? Well, light spoiler alert (light, because it's pretty obvious early on), but it looks like an accident, because it is an accident. Yes, the accident killed off someone set to testify against the gang's leader. And, yes, said gang leader's brother has an engineering degree. And maybe he does kind of look like someone Otto saw on the train. But the world's full of coincidences, and they don't always mean something.

Unfortunately, they don't figure any of this out until after murdering several members of the gang. And by that time, the rest of the gang manages to track them down. The showdown is fairly over-the-top and ends with the remainder of the Riders dead, both Markus and Mathilde shot, and an ambulance on the way. There's a sequence between Markus and Mathilde demonstrating Markus has learned his lesson and is genuinely sorry. Then...

We cut to Christmas, all the main characters are fine, and everyone's celebrating together. We also cut back to the girl at the beginning receiving a blue bike for Christmas, blissfully unaware of the consequences her innocent request had.

And there's a part of me that thinks this ending - and possibly beginning - were late additions, replacements for some other ending that got cut. In part because of the tonal disconnect, but even more because there are some big plot holes (no, actual plot hole - I'm aware the term gets misused) it opens. Even if we assume Markus and Mathilde made it (to say nothing of her boyfriend, who had his fingers broken, got shot, and yet here seems fine), it makes absolutely no sense Markus, Otto, and their partners wouldn't have been arrested for the murders that led the gang to them. Those were fundamentally unprovoked attacks, and while I'm not an expert on Denmark's legal system, I'm guessing "they were still bad guys," isn't a catchall defense.

I could be wrong - thematically, I think the ending does a good job continuing the main threads of the movie. It's just... it really feels like there's a bleaker, more believable alternate conclusion out there.

For our purposes, it's particularly relevant, because this ending is really the only reason Riders of Justice qualifies as a Christmas movie. Because the beginning (which almost may have been tacked on) establishes Christmas is coming and the ending is set at Christmas, this establishes the entire film is set during the lead up to the holidays (though, to be fair, when is left pretty ambiguous). A lot of the music is also holiday-themed, though - again - this could have been a late change.

Was this a dark action movie that got some reshoots and a last-minute edit to change it into a Christmas action flick? I don't know for sure, but... it kind of feels like it. If so, I guess we've found a new sub-genre of holiday movie.

Regardless of all that, the movie is quite good. I don't think I was quite as smitten as some critics (I'm seeing this tossed around on Twitter as making a few best of year lists), but I enjoyed it. And I certainly understand why it's as well regarded as it is - the writing is really smart, and the subject matter unusually nuanced. Also, Markus is played by Mads Mikkelsen, so that's a hell of a plus. The rest of the cast is great, too.

This is a great film, and it appears to qualify as a Christmas film. I just can't help but reflect on the possible web of causes that might have made that possible...